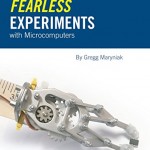 1) Doing new things is good for you.

2) The Space Studies Institute is about Making the High Frontier.

3) Having a great teacher who shows you the great reasons makes all the difference.

4) Any important training starts with fundamental stuff that is easier to get past than you think.

5) Doing new things is good for you.

A few months ago SSI Senior Associate and former Executive Director Gregg Maryniak (Singularity University, International Space University, XPrize, St Louis Science Center) was having lunch with SSI President Gary Hudson and our old Armatron Lunar Teleoperations Demonstrator came up. It was mentioned how expensive and complicated it was to put a 2.7 second delay in that toy and the video feed but how it was worth it as the Demonstrator made it clear to so many just how simple remote operations on the Moon could actually be.

Someone said, ‘I’ll bet we could do that project with an Arduino and some servos for a lot less now’ and Gregg got very excited. He said that Arduinos are nice and popular but he’s found hardware that’s so cheap that even if you blow a lot of them up in playing around it’s no big deal. He started telling us about these PICAXE chips and some of the fun but really useful things he’d been making with them. And he mentioned that he was working on a book to make getting started really fast and very easy.

A few days ago while we were speaking about the Peter Diamandis conference paper Gregg casually mentioned that his book had just been released on Amazon. We got it.

The first couple of chapters are fundamentals (good, and short) and then the book really rolls. By Chapter 7 – and they are all very short chapters – your brain has got the gist burned in and several projects are already seen as truly simple to make. And at Chapter 12 the true SSI kicks in… We don’t want to spoil it for you but, truly, this is more than a book on making fun cool gadgets at a great price. This is SSI. And this is really fun!

Now on Kindle. Go Get It!

(Fearless Experiments with Microcomputers by Gregg Maryniak can be found on Amazon by clicking here.)