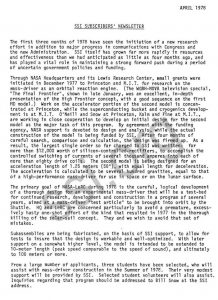 The first three months of 1978 have seen the initiation of a new research effort in addition to major progress in communications with Congress and the new Administration. SSI itself has grown far more rapidly in resources and effectiveness than we had anticipated as little as four months ago, and has played a vital role in maintaining a strong forward push during a period of uncertain government policies and funding.

Through NASA Headquarters and its Lewis Research Center, small grants were initiated in December 1977 to Princeton and M.I.T. for research on the mass-driver as an orbital reaction engine. (The WGBH-NOVA television special, “The Final Frontier”, shown in late January, was an excellent, in-depth presentation of the High Frontier concept, with a good sequence on the first MD model.) Work on the accelerator portion of the second model is concentrated at Princeton, while the superconducting bucket and cryogenics development is at M.I.T.. O’Neill and Snow at Princeton, Kolm and Fine at M.I.T., are working in close cooperation to develop an initial design for the second model as the major task of this program. By agreement with the funding agency, NASA support is devoted to design and analysis, while the actual construction of the model is being funded by SSI. After four months of careful search, comparison and calculation, the design was firmed up. As a result, the largest single order so far charged to SSI was written: for more than $12,000 worth of silicon-controlled-rectifiers, to accomplish the controlled switching of currents of several thousand amperes into each of more than eighty drive coils. The second model is being designed for an acceleration length of 1.25 meters (50″), with equal length for deceleration. The acceleration is calculated to be several hundred gravities, equal to that of a high-performance mass-driver for use in space or on the lunar surface.

The primary goal of NASA-LeRC during 1978 is the careful, logical development of a thorough design for an experimental mass-driver that will be a test-bed for continued research, development and construction in a program of several years, aimed at a mass-driver “test article” to be brought into orbit by the Shuttle. HQ and LeRC are concerned particularly to avoid a premature, excess­ively hasty one-shot effort of the kind that resulted in 1977 in the thorough killing of the solar-sail concept. They and we wish to avoid that set of mistakes.

Subassemblies are being fabricated, on the basis of SSI support, to allow for tests to insure that the design is workable and well-optimized. With later support on a somewhat higher level, the model is intended to be extended to 10-meter length (peak speed comparable to the speed of sound), and ultimately to 100 meters or more.

From a large number of applicants, three students have been selected, who will assist with mass-driver construction in the Summer of 1978. Their very modest support will be provided by SSI. Selected student volunteers will also assist. Inquiries regarding that program should be addressed to Bill Snow at the SSI address.

Support for the basic, continuing effort at Princeton to keep the High Frontier research active and growing is still uncertain, but as a result of the intense period of negotiation of the past few months, the prospects now look somewhat better than they did last Autumn. Meanwhile, SSI funds have provided the vital guarantee that has allowed the core group to remain together; without SSI, our staff would all have had to be dismissed by the beginning of this year.

It is a pleasure to report that our work over the past years has resulted, in recent months, in several new initiatives by NASA directly related to the High Frontier:

a)  NASA-JSC to Convair/General Dynamics: A contract for direct comparison of terrestrial and non-terrestrial materials (NTM) as sources for construction of large structures in space.

b)  NASA-JSC to the Lunar and Planetary Institute for research on the chemical processing of NTM.

c)  NASA-MSFC to an as-yet unnamed aerospace contractor for detailed study of processing and fabrication plant machinery for use in space.

The latest ideas on a possible “routing” toward productive use of resources beyond the biosphere are contained in a beautifully-produced special 16-page color section of the March 1978 “Astronautics and Aeronautics”. With this letter, a copy of that Special Section is being sent to you as an SSI subscriber.

The political situation continues to change rapidly, in general, positively. Following the “High Frontier” House Concurrent Resolution 451 (see “A & A” Special Section), there have been introduced into Congress:

a)  A “Satellite Power Demonstration Act”, calling for a $25 million program of experiments and tests. Our group strongly supports this effort, though the Act does not look beyond initial low­orbital tests. (Representative Flippo, Alabama)

b)  A “High Frontier Feasibility Act” in the Senate, in the form of an amendment to the appropriation for the National Science Foundation. This calls for a two-year study at $0.5 million per year. The language of the Act is excellent, and we strongly support it. (Senator Williams, New Jersey)

This is action legislation, as contrasted with H. Con. Res. 451, which is a statement of purpose. Senator Williams informs me that his office has re­ceived an extraordinary amount of voter response to this Act, essentially all of it highly favorable.

Contact with the Executive has been excellent in the first quarter of 1978. A long meeting with Dr. Frank Press, the President’s Science Advisor, in January, has been followed by meetings with Dr. John Deutch, Director of Research for the Department of Energy, with officers of the Department of State, and with presidential advisors. Further meetings have been scheduled. It is significant that Dr. Press regarded the successful formation and strong initial funding of SSI as of great importance.

Dr. O’Leary, Dean Cheston and I, as well as other friends, have all given testimony within the past months, variously before committees of the House or

Senate. Several circumstances appear to be combining to force the Executive Branch to educate itself much more thoroughly on the issues of satellite power and of the use for human benefit of resources beyond the biosphere. Among these are strong {even highly critical) pressure from Congress, evidence of strong public interest, and awareness of substantial Soviet activity.

The U.S.S.R. recently announced successful tests of 1ts own Shuttle (a more limited machine than ours, designed mainly for personnel transfer), and is carrying out a systematic, long-range program toward a totally closed, self­sufficient life-support system, on a level several times as great as our own.

You should be alerted to a confrontation that has not yet surfaced: there is a substantial possibility that the U.S. will continue development of a breeder reactor, by one of several technica1 routes. There may then emerge two alternatives for satisfying long-term energy needs: the breeder, with its potential for producing large quantities of fissionable materials that could be diverted to military or terrorist use, and satellite power, a militarily vulnerable technology that cannot be turned into an effective weapon. Given our grave imbalance in payments (more than a $4.5 billion deficit last month alone), there will be strong economic pressure to ship abroad whichever of these technologies is developed. In terms of the escalation of conflict versus its reduction, the two alternatives have very different consequences.

To illustrate the complexities of interaction in the political sphere, the U.S. Lunar Polar Orbiter program has now been turned down three times by the Office of Management and Budget, and may not be revived. Perhaps for that reason, the Japanese government has now announced plans to launch a Lunar Polar Orbiter of its own, and there is Soviet interest as well. Such a program, whichever nation does it, is vital to the assay of the lunar surface for best choice of a mining and materials-transport site.

Thanks to SSI, our push toward the High Frontier has been strengthened rather than interrupted during the six critical months just passed. Its continuation is now assured through early Autumn, 1978. As a Subscriber to SSI you will be pleased, I am sure, that Bantam Press has agreed to display, at no cost, an invitation for support of the Institute, in the second and later printings of the paperback edition of my book, “The High Frontier” (published January, 1978). As I look back over the recommendations for research made in our 1976 and 1977 NASA-supported studies, it is remarkable and satisfying that most of the more critical ones are now under way, at least at a minimum level.

SSI’s role will become even more important during these next months, because of a change now going on within the Administration. From now on, NASA grants will be much more restrictive. Independence, free inquiry, the ability to select new, promising avenues for research, and the freedom to speak out in Congressional testimony have been vital to the progress the High Frontier concept has made so far. But as the result of new budgetary pressures and new political conservatism, future grants will be much more spelled out and programmed by Washington. NASA grant funds will be usable only for specified technical research, not for the investigation of new topics. We will depend on SSI funds to support the continued dialogue with Government figures and the continued inquiry into new research areas.

Many hundreds of people have become Subscribers to SSI during the past months. In consequence, my wife, as Secretary/Treasurer of SSI, has taken on a new task of careful record-keeping that now occupies hours of her time every day. Even so, as a matter of policy, both she and I, as Officers of SSI, will continue to serve the Institute without compensation. All of us in the organization welcome your efforts to extend SSI’s support and the number of its Subscribers. With your help, it will thrust with even greater effectiveness toward the early realization of the High Frontier concept.

NOTE:
As you know, SSI is not a lobbying organization. People interested in communicating directly with legislators can write to:

National Action Committee for Space
P.0. Box 50011
Washington, D. C. 20004
A free information packet on how, when and where to write effective letters is available, as well as a “hot-line” service on pending space legislation. Please enclose a large, stamped, self-addressed envelope.