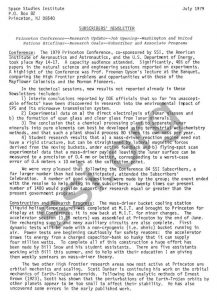 The 1979 Princeton Conference, co-sponsored by SSI, the American Institute of Aeronautics and Astronautics, and the U.S. Department of Energy, took place May 14-17. A capacity audience attended. Significantly, 40% of the papers in the natural science and engineering sessions reported on experiments. A highlight of the Conference was Prof. Freeman Dyson’s lecture at the Banquet, comparing the High Frontier problems and opportunities with those of the Mayflower Colonists and the Mormon Pioneers.

In the technical sessions, new results not reported already in these Newsletters included:

l) Interim conclusions reported by DOE officials that so far “no unaccept­able effects” have been discovered in research into the environmental iflllact of SPS and its microwave transmission system.

2) Experimental data on a) the direct electrolysis of lunar glasses and b) the formation of spun glass and clear glass from lunar minerals.

3) The conclusion that a chemical processing plant to separate lunar minerals into pure elements can best be developed using terrestrial wet-chemistrymethods, and that such a plant should process 80 times its own mass per year.

4) Student research results that a) a mass-driver reaction engine need not have a rigid structure, but can be straightened by lateral magnetic forces derived from the moving buckets, under active feedback and b) flying-spot scan experimental data that a mass-driver payload leaving the lunar surface can be measured to a precision of 0.4 mm or better, corresponding to a worst-case error of 0.6 meters x 10 meters at the collection point.

We were very pleased that following the Conference 84 SSI Subscribers, a far larger number than had been anticipated, attended the Subscribers’ Celebration. A number of good suggestions were made by the group; the event ended with the resolve to help bring in new subscribers: twenty times our present number of 1400 would provide support for research equal or greater than the present government program!

The mass-driver bucket cooling station (liquid helium temperature) was completed at M.I.T. and brought to Princeton for display at the Conference; it is now back at M.I.T. for minor changes. The accelerator section (1.25 meters) was assembled at Princeton by the end of June. The recharging supply and many auxiliary circuits are also complete. First dynamic tests will be made with a non-cryogenic (i.e. ohmic) bucket running in air. Power tests are beginning cautiously for safety reasons: the accelerator draws its energy from a charged capacitor-bank so husky that it can supply four million watts. To complete all of this construction a huge effort has been made by Bill Snow and his student assistants. There are five assistants working with Bill this summer, and to help with their education I am giving them weekly seminars on mass-driver theory.

The two other High Frontier research areas now most active at Princeton are orbital mechanics and scaling. Scott Dunbar is continuing his work on the orbital mechanics of Earth-Trojan asteroids. Following the analytic methods of Ernest Brown (1923), Scott has shown that the perturbations of the Earth-Trojan orbits by other planets appear to be too small to affect their stability. He has also uncovered some errors in the early published work.

Studies of minimum-cost approaches to high productivity in space are in progress, using the methods of scaling and bootstrapping. We will continue this work using the latest data available; it appears a high-payoff program is reachable well within Shuttle lift constraints, possibly at a total program cost no more than that of Shuttle development.

In addition to this ongoing research, at Princeton during this past academic year, two Senior Theses and six Junior Papers were completed on High Frontier research topics.

It is anticipated that one staff member will be added to the NASA­supported mass-driver project. We invite submission of resumes at this time to Laura Hagopian, Dept. of Physics, Jadwin Hall, P.O. Box 708, Princeton, NJ 08544. The appointment would be made this Autumn, probably to the Research Assistant job category. Candidates should be recent graduates, one or two years since completion of B.S. or B.A. degree in Physics or Electrical Engineering. Practical work experience in electrical-circuit work (discrete-component, not logic-level) is essential. The appointee will work with Bill Snow. Initially, the appointment will be for one year, with the possibility of renewal. The job would be appropriate for someone who wishes to gain one to two years of work experience before returning to school for a higher degree. I should warn candidates that strong dedication will be needed, because long hours and extra work are the norm in research groups under my direction. Princeton is an equal-opportunity employer. The job opening will also be advertised in Princeton area newspapers.

As Subscribers know, government support for all High Frontier research other than the mass-driver was derailed in late February by the abolition of the NASA-OAST Office of Advanced Planning. A great deal of my time and effort over the past four months has gone into briefings in Washington to improve that situation. These included a long meeting on April 25th with Dr. Frosch, Administrator of NASA, then on May 10th, delivery of the NASA Administrator’s Colloquium (which drew S.R.O. attendance at Headquarters), other private meetings, and formal briefings at the Department of Energy’s SPS Review (June 6) and at a joint NASA/DOE/NSF all-day session on June 12th. In terms of understanding and appreciation of excellent research already done, and of the practicality and near-term applicability of the High Frontier concept, great progress has certainly been made. The final June 12 briefing by Convair, Lunar and Planetary Institute, M.I.T., Princeton, and NASA centers was very well received, as were its predecessors. Now this better understanding must be trans­lated into action, a task we face over the next months.

My briefing at DOE on June 6th was particularly concentrated; enclosed, for your information and use, are the viewgraphs I prepared for it, covering the National program rather than just the Princeton work.

Other, less technical briefings were given at the United Nations on June 19th and in a Congressional Seminar on June 27th.
Critical-Path Research Goals:

At the present time the Space Studies Institute has as its highest “New Start” priority sponsoring a bench-chemistry research project to develop a working-model for converting lunar soils to pure elements. This model will operate with a mix of mjnerals identical to those found in typical lunar soils. A request for research proposals will be made by the Institute only when adequate funds for the project have been accumulated.

Recent translations of The High Frontier:

Friends interested in high-energy physics may wish to keep an eye out for Elementary Particle Physics, a graduate-level textbook by O’Neill and Cheng.The book is being publishe by Addison-Wesley and is due out this Autumn. The book has been in the works for some fifteen years; David Cheng received his Ph.D. under my direction in 1969, and is now Vice-President of Intel-Magnetics.
Articles and Lectures:

Omni magazine for July carries an interview, carefully researched by Monte Davis; it closes with a notice for SSI, kindly added at our request by the editors of Omni.

In April the U.S. magazine, Amerika {published in Russian in the U.S.S.R.), carried an article based on another interview. In the same month the Russian magazine, Soviet Life {published here in English), carried a scholarly article by Yuri Shkolenko comparing work of Tsiolkowsky with our modern work in the West. This spring there were also many other magazine and television interviews, too numerous to list.

My future lecture schedule includes Whitman College (eastern Washington state) on September 3rd and Rochester (NY) Institute of Technology on September 27th. Those interested in attending should contact the organizers for permission before doing so.

Dr. Harry Ruppe cf the Technische Universitat Munchen and I are scheduled to co-chair a session on Advanced Systems at the I.A.F. World Congress in Munich on September 19th.  Several papers will be given summarizing recent High Frontier research.

The Japanese Government has extended invitations to the NASA Administrator, Dr. Frosch, and me to visit Japan for one week prior to next April. Dr. Frosch and I have both accepted the invitations in principle.

We have thought for some time about recognizing SSI supporters through a numbering system. We have now gone over Institute records from the beginning and assigned each Subscriber an identifying number in chronological order. You will find yours below.

We are pleased to announce the formation of the Space Studies Institute Senior Associates. This is a new program to provide an opportunity for those who want to give substantial support to SSI. The program is a five-year commitment to annual giving, thereby helping to assure continuous progress toward the research and educational goals of the Institute.

Senior Associates will receive numbered certificates to provide recognition and a permanent record of their early support of the work towards space manufacturing and humanization. Categories for annual donations in the five-year pledge program are as follows:

For further information about becoming a Senior Associate, please write or telephone the Institute (609-xxx-xxxx or -xxxx) with your name, address and telephone number, and you will be called to discuss details.

With all good wishes,