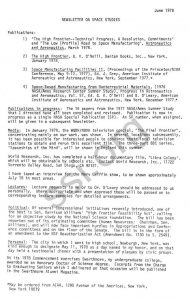 1 ) “The High Frontier–Technical Progress, A Resolution, Commitments” and “The Low (Profile) Road to Space Manufacturing”, Astronautics and Aeronautics, March 1978.

The 16 papers from the 1977 NASA/Ames Summer Study that I directed have all been completed and reviewed. Publication is now in progress as a single NASA Special Publication (SP). An SP number, when assigned, will be given in a subsequent Newsletter.

In January 1978, the WGBH/NOVA television special, “Th: Final Frontier”, concentrating mainly on our work, was shown. In several locations subsequently, it has been possible for interested people to.convince their local television stations to obtain and rerun this excellent film. The three-part BBC series, “Spaceships of the Mind”, will be shown in England this summer.

I have taped an interview for the Merv Griffin show, to be shown approximately July 18 in most areas.

Lecture requests to me or to Dr. O’Leary should be addressed to us
personally. Where appropriate and when approved these will be passed on to corresponding lecture agencies for detailed arrangements.

Of several Congressional initiatives recently introduced, one of
the best is Sen. Harrison Williams’ “High Frontier Feasibility Act”, calling for an objective study by the National Science Foundation. The bill has been reported out of its originating committee (Human Resources: Chairman, Sen. Williams), and will now face important hurdles in Appropriations and Confer­ence committees and on the floor of the Senate. The bill is in the form of an amendment to the NSF Reauthorization Act (Amendment No. 1730 to S. 2549).

The city in which I went to high school, Newburgh, New York, was kind enough to designate May 11, 1978 as a day named in my honor, and on that day held a testimonial dinner with a presentation of plaques by civic groups.

At its 1978 Commencement exercises Swarthmore, my undergraduate college, awarded me.an Honorary Doctor of Science degree. Excerpts from the Charge to Graduating Seniors which I delivered on that occasion will be published in the Swarthmore Alumni Magazine.

In this past six months interaction with the Executive and Congress has been intense and productive, and research activity has been similarly productive. Those wishing to support our work may wish to do so by becoming Subscribers to the Space Studies Institute (see form below). SSI has played an essential, unique role by maintaining our group intact and supporting a vigorous forward thrust during this period.

As a matter of principle, this Newsletter will continue to be sent to all who request it without charge or obligation. SSI Subscribers, a group with a deeper, continuing interest and commitment, are sent more frequent and detailed accounts of the research results and political activity, as well as copies of certain critical publications.