Attendance will be limited to 200 participants, due to meeting room capacity. Registration and hotel reservation information are here.

Space solar power appears to offer the cleanest option for generating the large quantities of electricity needed by a progressive civilization. Among other options for power generation, none has such benign environmental impact or is so safe. Space solar power would forestall nuclear proliferation and nuclear terrorism. It prevents the environmental damage of mining uranium and fossil fuels. Satellite solar power is particularly attractive for countries like China which depend on coal-fired power stations for most of their electrical capacity because coal smoke reduces China’s food production by an estimated 10%. The physics of the power transmission preclude its use as a weapon. What is needed is a demonstration of economic feasibility.

Generating electricity in space and transmitting it to end-users on the Earth offers significant benefits over ground-based solar power. The sun shines continuously in geostationary orbit, except for two brief periods during the equinoxes. Solar power in space is not reflected by clouds, nor is it attenuated by the atmosphere. A power station in high orbit receives more than four times as much energy as the best ground-based sites and about six times more than the average site. To provide continuous power, a ground-based solar power installation requires electrical storage backup roughly equal in cost to the cost of the generating equipment. So the capital cost of ground-based solar power should be much more expensive than the capital cost, excluding transportation, of mature satellite solar power. The receiving stations can be located close to the electricity demand and so avoid the 10-20% transmission losses through long transmission lines. For radio frequency transmission, the receiving antennas are transparent to sunlight, allowing farming of the land beneath the receiving antenna. Power transmission can be switched from one place to another to follow demand.

SSI believes, however, that the most cost effective satellite solar power stations will be built from materials mined from the Moon or asteroids. To make that argument, robust industrial processes to get engineering materials from the Moon are needed, and except for SSI’s work, little work on non terrestrial materials has been done. The Moon offers materials to build low technology and low-cost, but heavy, satellite solar power stations. The technology for electromagnetic launch from the Moon has improved enormously in the past three decades. An efficient mass driver using the SSI design could be constructed with the ultra-capacitors and high-power solid-state switches currently sold to the automotive market. A mass driver placed on the Moon could launch annually many thousands of tons of construction material for satellite power stations into high Earth orbit. The marginal cost for launching material from the moon to high Earth orbit is calculated to be a few percent of the cost of launching the same material from the Earth because the lunar escape energy is five per cent of that from the Earth and mass drivers are both cheaper and more efficient than rockets. See “The World’s Energy Future Belongs in Orbit” on ssi.org.

There are many possible technical options for power conversion in a power satellite. We do not know which of these options will be the most economical. It would be a grave mistake to prematurely specify the power generation subsystem. The government made that mistake with nuclear power, commercializing a system that had been optimized for military use. It would be a mistake to assume that either heat engines or thermionic conversion cannot compete with photovoltaic cells, particularly if most of the material to construct the power satellite is sourced from the Moon.

The National Security Space Office has identified a tactical and strategic need for space solar power. It is unfortunate that one of the most promising eternal power sources is otherwise an orphan in the Federal Government. 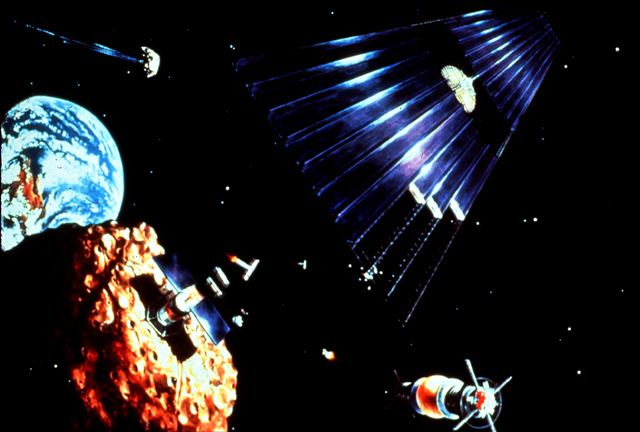 Solar Power Satellites are a solution to both global energy needs and to the greenhouse gas problem. The primary obstacle is the enormous lift costs. A cheaper source of construction materials than Earth must be found.

One of the great phenomena of our times is the environmental movement. Like any popular, large-scale movement, it has its irresponsible fringes, but it is impressive not only for its power, but for the number of its thoughtful, reasoning supporters. And none too soon, because within the past half-century the growing world population’s drive to industrialize has reached the point where human activity is clearly damaging the environment, in some cases irreversibly. Such damage is not unique to our own times; the deforestation of ancient Greece and much of Europe and Britain in the past few hundred years are examples. Now the damage has become general and worldwide.
END_OF_DOCUMENT_TOKEN_TO_BE_REPLACED

Space Studies Institute is cosponsoring New Trends in Astrodynamics and Applications III, an International Conference at Princeton University, August 16, 17 and 18.

For obvious reasons SSI has a particular interest in new types of low energy trajectories, motion near LaGrange points, halo orbits, weak stability boundaries and (relatively) low thrust transfers. SSI has a project to develop small, cheap asteroid probes using a solar sail that could be used to fly by a large number of asteroids on a single mission, so we are particularly interested in mission concepts incorporating low energy trajectories as well as the underlying numerical methods and algorithms for orbit and trajectory optimization.

The conference homepage is www.math.princeton.edu/astrocon/body_cfp.htm The speaker list is excellent and the preceding conferences have been very productive. I hope to see many SSI associates there.

SSI Executive Vice President Lee Valentine will give a talk. For the abstract, END_OF_DOCUMENT_TOKEN_TO_BE_REPLACED