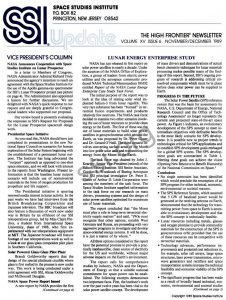 SPACE STUDIES INSTITUTE
P.O. BOX 82
PRINCETON, NEW JERSEY 08542
[[librarian note: This address is here, as it was in the original printed newsletter, for historical reasons. It is no longer the physical address of SSI. For contributions, please see this page]]

In a letter to Members of Congress, NASA Administrator Admiral Richard Truly announced the agency’s intention to reach an agreement with the Space Studies Institute for the use of the Apollo gamma-ray spectrometer for SSI’s Lunar Prospector project. The Administrator also appointed a liaison for further discussions. We are delighted with NASA’s quick response to our request and are deeply grateful to Congressional leaders who supported our proposal. 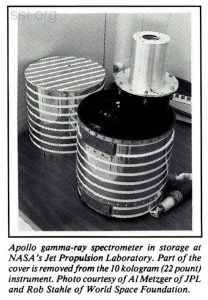 Our review board is presently evaluating the responses to SSI’s Request for Proposals for the Lunar Prospector spacecraft design work.

As you read this, NASA should have just completed its presentations to the new National Space Council on scenarios for human exploration of the Solar System beginning with the establishment of a permanent lunar outpost. The Institute has long advocated the “outpost” approach as opposed to one-shot space missions, and we will look with interest to the reports from Washington. Present information is that the baseline lunar outpost scenario will include use of nonterrestrial materials in the form of oxygen production for propellant and life support.

The Presidential initiative is spurring renewed media interest in lunar activity. In the past weeks we have had interviews from the British Broadcasting Corporation and Japanese television. The BBC broadcast will also feature a discussion of work now under way in Britain by an offshoot of our SSI teleoperations group, led by Miss Claire Pinches, a student from International Space University, class of 1988, who first experimented with our teleoperations equipment at MIT. The Japanese broadcast will feature footage of our teleoperations work as well as a look at our glass/glass composites pilot plant in Southern California.

Brandt Goldsworthy reports that the design of the special platinum crucible where  glass is first melted in the process is now underway. This work is being conducted under a joint agreement with SSI, Alcoa/Goldsworthy and McDonnell Douglas.

A new report by NASA provides the first U.S. government look at solar power satellites since 1980. This issue of Update is devoted to excerpts from the newly released Lunar Energy Enterprise Study. The SSI family can take pride in the fact that we literally singlehandedly advanced the state of the art on SPS during this time period. As the 1980’s draw to a close, a new environmental awareness is raising interest in space power alternatives for terrestrial energy needs.

On behalf of Dr. O’Neill, the Board, and Staff of the Space Studies Institute, best wishes to you and your family for a happy holiday and a safe and prosperous new year.

NASA has just released its first report on solar power satellites in nearly a decade. Under the auspices of the NASA Office of Exploration, a group of leaders from electric power utilities and the aerospace community produced NASA Technical Memorandum 101652 entitled Report of the NASA Lunar Energy Enterprise Case Study Task Force.

The initial purpose of the report was to look at the idea of mining solar wind implanted helium-3 from lunar regolith. This very rare substance has been “burned” in terrestrial fusion experiments and produces relatively few neutrons. The NASA task force decided to examine two other scenarios involving the use of lunar resources to provide clean energy to the Earth. The first of these was the use of lunar materials to build solar power satellites in geosynchronous orbit around the Earth, as was proposed by Dr. Peter Glaser and Dr. Gerard O’Neill. The third scenario involves converting surf ace areas of the Moon into low grade solar cells and transmitting the energy from the Moon to the Earth.

The task force was chaired by John J. Kearney, Senior Vice-President (retired) of the Edison Electric Institute. SSI Senior Associate, Gordon R. Woodcock of Boeing Aerospace and SSI principal investigator Dr. Peter E. Glaser of Arthur D. Little Corporation were among the members of the task force. The Space Studies Institute supplied information to the task force on our research on mass drivers, processing systems and the design of solar power satellites optimized for maximum use of lunar materials.

The report concluded that “the Moon must play a role in long-term terrestrial electricity supply matters” and said, “(W)e must recognize that other nations, notably West Germany and Russia, are proceeding with very aggressive programs to investigate and develop space-oriented energy systems. It will be done, it is just a matter of by whom.”

All three options considered in this report have the potential promise to provide a practically inexhaustible, clean source of electricity for the US and worldwide, without major adverse impacts on the Earth’s environment.

The report calls for comprehensive studies by industry, NASA and the Department of Energy so that a suitable national commitment for space power can be established. The following excerpts demonstrate two important facts. First, the Institute’s work over the past twelve years has been vital to the solar power satellite concept. The development of mass drivers and demonstrations of actual bench chemistry techniques for lunar materials processing makes possible many of the findings of this report. Second, SSI’s ongoing program of research is addressing critical unresolved components which must be in place before clean solar power can be supplied to Earth.

PROGRESS IN THE FUTURE

The Solar Power Satellite (SPS) reference system that was the basis for assessments by NASA, U.S. Department of Energy, National Research Council and the Office of Technology Assessment[1] no longer represents the current and projected state-of-the-art space power. As Figure 1 indicates, an evolutionary development of the SPS concept to meet intermediate objectives with definable benefits is the most likely scenario for SPS development. It is possible now to project trends in technologies critical for SPS applications and to establish SPS development goals envisaged for a global SPS system. The SPS development goals are summarized in Table 1. Meeting these goals can achieve the vision (Opening New Resource to Benefit Humanity) of the National Commission on Space.[2]

• No single constraint has been identified which would preclude the resumption of an SPS program for either technical, economic, environmental or societal reasons.

• The SPS Reference System, which assumed that 5GW of baseload power would be generated at the receiving antenna on Earth, demonstrated that the technology for transmitting power from space to Earth is amenable to evolutionary development and that the SPS concept is technically feasible.

• Lunar resources including metals, glasses and oxygen promise to provide commodity materials for the construction of the SPS in geosyncronous orbit provided that the use of these resources can be competitive with terrestrial materials. ‘

• The significant progress that has been made as a result of broadly based technical, economic, environmental and societal studies on the SPS is resulting in a growing consensus that the SPS is one of the promising power generation options which could contribute to meeting global energy demands in the 21st century.

• The SPS concept has the potential, not only for baseload power generation on a global scale, but also represents an evolutionary direction for expanding human activities in space and the use of extraterrestrial materials.

SOLAR POWER SATELLITE – WHAT WE KNOW 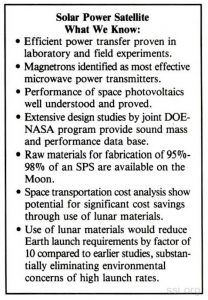 Conversion of sunlight to electricity by photovoltaics is well understood. While selection of the preferred photovoltaic system would require a substantial amount of work, several options exist today with performance superior to that assumed by the SPS systems studies of 1976-1981. These systems studies, adjusted to allow for recent technology advances, provide a sound mass and performance data base. 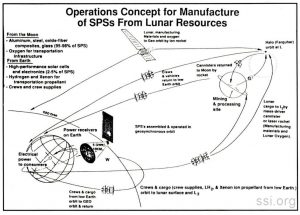 Use of lunar materials offers a significant reduction in transportation costs for the emplacement of SPSs in geosynchronous orbit. Most of the raw materials needed to fabricate SPSs are available on the Moon. A few years ago, it was feared that increased in-space fabrication costs would offset the transportation savings, but advances in automation and robotics, applicable to space assembly, alleviate that concern. 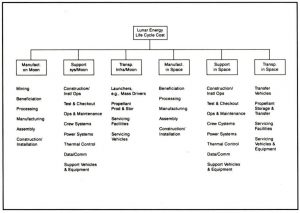 Large-scale use of lunar materials will reduce needed Earth launch rates by at least a factor of ten compared with construction of SPSs entirely from Earth-derived materials. This substantially eliminates the environmental concerns associated with extremely high launch rates.

Solar power satellites optimize to very large unit size, because of the physics of power beaming. The wavelength selected by the SPS systems studies was 12 cm. (2.45 GHz) in the industrial microwave band. An alternate industrial band is available at about 5.6 GHz. It is projected to have somewhat less efficiency, and greater losses associated with severe weather. A 5-GHz system would, however, optimize at 1-2 GWe. 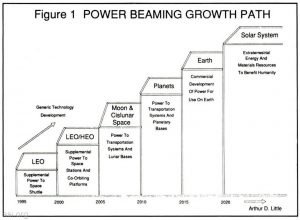 Thermal limits of one kind or another result in power density limits at both the transmitter and receiver. Plugging these limits into system optimizations is the mechanism that – determines optimum unit size. 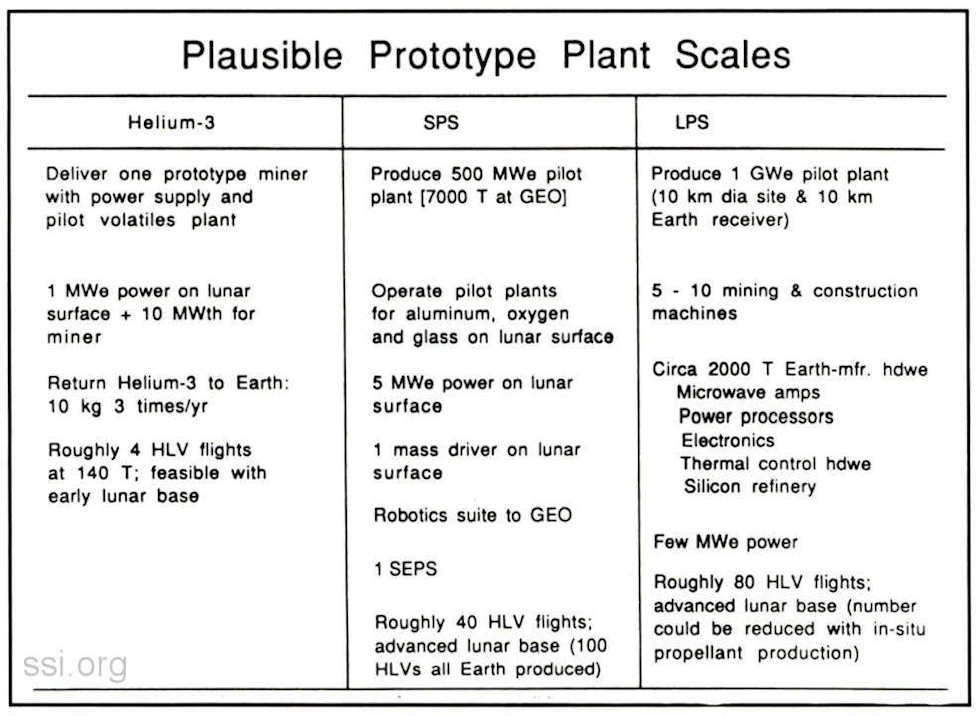 The most important SPS issues deriving from the lunar production scenario are described below.

The most promising design strategy appears to be use of high-performance photovoltaics with high concentration of sunlight. This strategy could permit operation of the photovoltaic system at efficiency approaching 30%. Almost all of the mass of material is in the concentration, structural support, and power conductor systems. Even if the photovoltaics are produced on Earth, the lunar material contribution to the SPS can exceed 95% mass.

Lunar and space manufacturing and assembly systems need definition. Contemporary thinking about space assembly systems would lead to (1) use of the SPS as its own assembly platform, eliminating the need for a large and expensive assembly facility, and (2) heavy reliance on automation and robotics assembly operations, reducing the human crew at the geosynchronous assembly station from hundreds to a few. If these potential advances can be realized, the cost for assembly operations can be controlled to a modest figure that is a small part of the overall SPS cost. 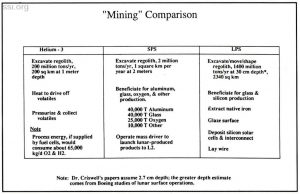 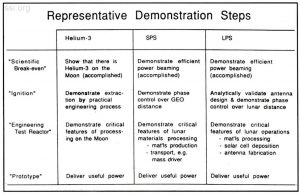 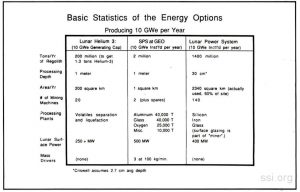 Solar Power Satellites
What We Know:

• Raw materials for fabrication of 95%­98% of an SPS are available on the Moon.