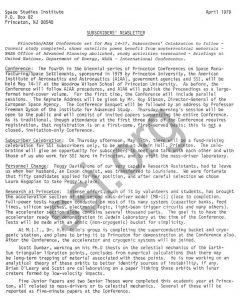 Space Studies Institute
P.O. Box 82
Princeton, NJ 08540
[[librarian note:  This address is here, as it was in the original printed newsletter, for historical reasons.  It is no longer the physical address of SSI. For contributions, please see this page]]

The fourth in the biennial series of Princeton Conferences on Space Manu­facturing/Space Settlements, sponsored in 1979 by Princeton University, the American Institute of Aeronautics and Astronautics (AIAA), government agencies and SSI, will be held May 14-17 at the Woodrow Wilson School of Princeton University. As before, the Conference will follow AIAA procedures, and AIAA will publish the Proceedings as a large ­format hard-cover volume. For the first time, the Conference will include parallel sessions. The Keynote Address will be given by Mr. Roy Gibson, Director-General of the European Space Agency. The Conference Banquet will be followed by an address by Professor Freeman Dyson of the Institute for Advanced Study. Thursday morning’s session will be open to the public and will consist of invited papers summarizing the entire Conference. As is traditional, though attendance at the first three days of the Conference requires registration, that registration is on a first-come, first-served basis; this is not a closed, invitation-only Conference.

On Thursday afternoon, May 17th, there will be a fund-raising celebration for SSI subscribers only, to be held at Jadwin Hall, Princeton. The cele­bration will give an opportunity for subscribers to meet and talk with each other and with those of us who work for SSI here in Princeton, and to visit the mass-driver laboratory

Peggy Davis, one of our very capable Research Assistants, had to leave us when her husband, an Exxon chemist, was transferred to Louisiana. We were fortunate that fifty candidates applied for her position, and after careful selection we chose Laura Hagopian to take Peggy’ place.

Intense effort, much of it by volunteers and students, has brought the acceleration section of the second mass-driver model (MD-II) close to completion. Full-power tests have been conducted on most of its many systems (capacitor banks, feed lines, silicon switches, electronic logic, light-beam trigger circuits and many others). The accelerator section alone contains several thousand parts. The goal is to have the accelerator ready for demonstration in Jadwin Laboratory at the time of the Conference. Tests will be made with an ohmic (non-cryogenic) bucket for simplicity.

At M.I.T., Dr. H.H. Kolm’sgroup is completing the superconducting bucket and cryo­genic station, and plans to bring it to Princeton for demonstration at the Conference also. After the Conference, the accelerator and cryogenic systems will be joined.

Scott Dunbar, working on his Ph.D thesis on the celestial mechanics of the Earth-Sun triangular libration points, concludes from numerical calculations that there may be long-term trapping of material associated with those points. He is now working on an analytical theory of these orbits to better identify sources of instability, if any. Brian O’Leary and Scott are collaborating on a paper linking those orbits with lunar craters formed by low-velocity impacts.

Five Junior Papers and two Senior Theses were completed this academic year at Prince­ton, all related to mass-drivers or to celestial mechanics. Several of these will be reported as five-minute papers at the Conference.

With sponsorship from SSI and NASA, several workshops have been held addressing the possibility that a first “minimum beachhead” for the use of nonterrestrial materials could be reached sooner and at much lower investment than in the plans worked out by previous studies. The approach would minimize requirements for new-type systems, use existing levels of industrial automation, and scale down the initial productive facil­ity to the minimum size at which high efficiency can still be obtained. The results are exciting and indicate the possibility of a program that would require only ten or twentyShuttle flights and an investrrent in the $10 billion (rather than $50 or $100 billion) range. This is a direction we feel particularly deserves intense effort, and we intend to continue it.

As subscribers are aware, the largest, most thorough study carried out on space manufacturing/settlements was done at the NASA Ames Laboratory in 1977. Though the seventeen technical papers from that Study were completed and peer-reviewed long ago, there have been delays in publication. By request to the Administrator of NASA I was able finally to get the document higher priority, and the Administrator presented me with a copy of the camera-ready text at a recent meeting. The document is to be pub­lished this Summer as NASA SP-428; it will contain several hundred pages of text and line drawings and several color paintings. Our advance copy will be available for inspection at the Conference.

NASA has been in the process of reorganization for the past two years. As part of that process, in February the NASA OAST Office of Advanced Planning, which had funded studies at Convair, the Lunar and Planetary Institute (LPI), and M.I.T. and here at Princeton, was abruptly abolished. With it, all government studies of space manufacturing/settlements were cut off, and that cutoff has been verified in writing by a senior official. Unless new action is taken, our staff will be disbanded as of October l, 1979 as a result. SSI funds are at present enough to maintain a skeleton staff after that time, but not our present level of activity. The mass-driver research is not at pres­ent affected by the action, because that machine has application as a general-purpose reaction-engine in space and so is funded from a different NASA office.

In response to the crisis in government funding, and to broaden the community aware of the potential benefits of space manufacturing, briefings have been held during the past two months with senior officials of the following organizations: March 19 ­- Department of Energy; April 25 – NASA; April 26 – United Nations. My briefing of Dr. Frosch, Administrator of NASA, on April 25 covered the nationwide research recently cut off by the Agency. No further action or decision has yet occurred, so the future of our work now hangs in the balance. It was agreed that a closed technical symposium to inform simultaneously officials of NASA, D.O.E. and N.S.F. should be held. I will not belabor the point that these actions throw an enormous burden onto SSI.

I will be returning to NASA on May 10th to deliver the
Administrator’s Colloquium and to meet further with officials of that Agency. By long­ standing invitation, I will lecture in the series “Congressional Clearinghouse on the Future” on June 27th. The series is open only to members of Congress.

At the urging of Dr. Rashmi Mayur of India, several of us are
writing a paper for the United Nations Conference on Technology for Developing Nations (Vienna, late August). Co-authors are D. Criswell, P. Glaser, R. Mayur, B. O’Leary, P. Vajk and myself. The paper will probably be given by Dr. Vajk.

Two months ago, it was decided by the United Nations to hold a World Conference on Space in 1982. The location is not yet decided, but good contacts have been established so that our research will be well covered by papers at the Conference.

On September 17-22, 1979, the International Astronautical Federation will hold a World Congress in Munich. Dr. Ruppe of Germany and I are co-chairing a sess1on on Advanced Programs, at which will be given a number of papers relevant to our work.

Convair-General Dynamics Study: An economic study of the feasibility of using lunar mate­rials for satellite construction was recently completed under sponsorship by the now­abolished NASA OAST Advanced Planning Office. Even with conservative starting assumptions, the study concluded that lunar materials should substantially reduce the costs of, and de­crease adverse environmental impact of, building satellite power stations. Cost savings would probably occur, according to that Study, even with heavy economic discounting. Convair concluded also that continuation of a research program on NTM would allow their use in an SPS program even from its start, should that prove desirable. The Convair Study is of special interest because it constitutes an independent review of the ideas to which SSI has been dedicated since its beginning.

Senator Harrison Williams’ “High Frontier Feasibility Act” was enacted into law in the last session of Congress. After checking with NASA, D.O.E. and other agencies, the N.S.F. has now concluded that it will indeed carry out the review called for by the Act. The form and mechanism of the review have not yet been settled, but it ts likely that the National Academy of Sciences will take a substantial role. Our group will, of course, not be involved, because it is largely the ideas with which we have been associated that are to be reviewed.

At the request of LOOK Magazine, I wrote an article which appeared in its April 2nd issue, well illustrated in color (including a recent photograph of MD-II). Monte Davis of OMNI has completed a long interview with me which is scheduled for OMNI’s July 1979 issue. I would like to express my particular appreciation to Mr. Davis for the very high standard of reportorial responsibility he has maintained throughout this writing project.

Several lectures are scheduled during the next month:

The Subscriber List of the Institute continues to grow at a rapid pace, and because of the crisis in governmental funding still greater efforts will be made to acquire additional support. As another mechanism, I have decided that any potentially lucrative patents of my own, not in the domain of the government or the University, will be regis­tered in the name of SSI and that all income from such patents will go to SSI. That process is being initiated with an invention now in the search-and-application process. SSI Subscription Forms are available from our office at no cost, and we invite subscribers to send for them to be handed out to interested people at conventions and conferences.

With personal best wishes to all subscribers,

SPACE STUDIES INSTITUTE
P.O. Box 82, Princeton, New Jersey 08540, USA.
[[librarian note:  This address is here, as it was in the original printed newsletter, for historical reasons.  It is no longer the physical address of SSI. For contributions, please see this page]]

All Donations are Tax Deductible