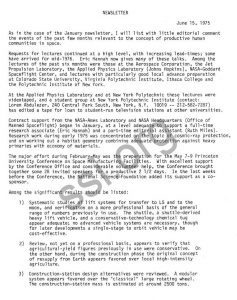 As in the case of the January newsletter, I will list with little editorial comment the events of the past few months relevant to the concept of productive human communities in space.

Requests for lectures continued at a high level, with increasing lead-times; some have arrived for mid-1976. Eric Hannah now gives many of these talks. Among the lectures of the past six months were those at the Aerospace Corporation, the Jet Propulsion Laboratory, the Applied Physics Laboratory (Johns Hopkins), NASA-Goddard
Spaceflight Center, and lectures with particularly good local advance preparation at Colorado State University, Virginia Polytechnic Institute, Ithaca College and the Polytechnic Institute of New York.

At the Applied Physics Laboratory and at New York Polytechnic these lectures were videotaped, and a student group at New York Polytechnic Institute (contact:  Loren Abdulezer, 240 Central Park South, New York, N.Y. 10019 212-582-7287) has edited a tape for loan to student-run television stations at other universities.
Contract support from the NASA-Ames Laboratory and NASA Headquarters (Office of Manned Spaceflight) began in January, at a level adequate to support a full-time research associate (Eric Hannah) and a part-time editorial assistant (Ruth Miles).  Research work during early 1975 was concentrated on the topic of cosmic-ray protection, and on working out a habitat geometry combining adequate protection against heavy primaries with economy of materials.

The major effort during February-May was the preparation for the May 7-9 Princeton University Conference on Space Manufacturing Facilities. With excellent support by the Conference Office and considerable volunteer help, the Conference brought together some 28 invited speakers for a productive 2 1/2 days. In the last weeks
before the Conference, the National Science Foundation added its support as a co­sponsor.

Among the significant results should be listed:

1)  Systematic studies of lift systems for transfer to L5 and to the
moon, and verification on a more professional basis of the general
range of numbers previously in use. The shuttle, a shuttle-derived
heavy lift vehicle, and a conservative-technology chemical tug appear adequate; no advanced vehicle systems are necessary, though for later developments a single-stage to orbit vehicle may be
cost-effective.

2)  Review, not yet on a professional basis, appears to verify that agricultural-yield figures previously in use were conservative. On
the other hand, during the construction phase the original concept
of resupply from Earth appears favored over local high-intensity
agriculture.

4)  Welding and brazing methods for vacuum and zero gravity were
reviewed. New options exist which could be quite convenient and which lend themselves to automation.

5)  Legal considerations require that for compliance with existing
treaties, a space-habitat development be non-military, that results
of research be made public, and that the conmunity be under the
jurisdiction of a launching nation or group. Given that compliance,
there appears so far to be no legal barrier to the development of
human communities in space.

6)  In the opinion of aeromedical professionals, a cycle of 16 hours
normal gravity and 8 hours zero gravity (during construction work)
should be safe for maintenance of good bodily health without loss
of bone calcium.

7)  For satellite solar power stations using closed-cycle turbogenerators, the achievement of 5 tons/megawatt would require a long development program, but a figure of 10 tons/megawatt is consistent with 1970’s technology.

8)  If the construction of satellite power stations is a major task
for the earliest space manufacturing community, then even with a high estimate for the cost of Model 1, high interest rates, and discounted economics, the development program could pay for itself within a short time, and could thereafter yield large profits.

None of these results should be regarded as definitive, but all are significant as verifying that the general approach we are all pursuing continues to make sense and is worthy of further study.

The success of the Conference was due in considerable part to a strong contribution by volunteers, among whom should be mentioned particularly David Criswell, Roger Miles, Roger Ho and Virginia Reynolds. A first rough draft of the Conference Proceedings is being prepared by Roger Miles, and will be made available to the Summer Study participants.

Journalistic articles which have appeared or whose drafts I have seen have been very positive in tone. These include:

The volume of mail has now reached a level at which I am forced to ask for help for most of the replies. A system including a number of volunteers has been set up by Roger Miles, Eric Hannah and Pam Csira, and we will try to assist it through its inevitable start-up problems. I will continue to reply personally to correspondence regarding policy, research contracts, lectures, and other matters as necessary.

During the next few months the major activity will be the Summer Study, but in addition, I have been asked to testify in late July before the Congressional Subcommittee on Space-Science and Applications, and to speak in September at the International Astronautical Federation Meeting on “Space and Energy” in Lisbon.

We have received verbal assurance that NASA support for this research will be put on a full year basis starting in September 1975. Eric Hannah will continue full time, and Ruth Miles fractional time.

It would be desirable to alert interested friends to the appearance of newspaper, radio and television coverage of this topic, but the total volume is now so large that I can no longer do so. One new effort should be mentioned, though: a first attempt at developing a short segment of narrated animation outlining the basic concepts in a manner suitable for translation into other languages. This is being done by Dolphin Productions in New York, in cooperation with the National Public Affairs Center for Television in Washington. It is scheduled for showing on the evening of July 17 on public television in a number of countries including the U.S.

I have been requested to testify on this topic before the space subcommittee (Congressman Don Fuqua, Chairman) of the House Committee on Science and Technology (Congressman Olin Teague, Chairman). This testimony is scheduled to occur at 10:00am on Wednesday, July 23 in the Rayburn House Office Building. The hearing is open to the public.