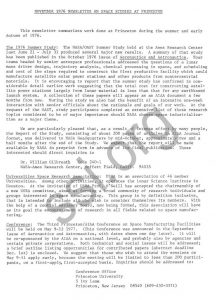 This newsletter summarizes work done at Princeton during the summer and early Autumn of 1976.

The NASA/OAST Summer Study held at the Ames Research Center last June 21 -July 31 produced several major new results. A summary of that study has been published in the October 1976 issue of Aeronautics and Astronautics. Four teams headed by senior aerospace professionals addressed the questions of a lunar mass driver design, trajectory analysis, chemical processing in space, and scheduling and cost of the steps required to construct the first productive facility which could manufacture satellite solar power stations and other products from nonterrestrial materials. It is encouraging to report that the summer study has confirmed in con­siderable detail earlier work suggesting that the total cost for constructing satel­lite power stations largely from lunar material is less than that for any earthbased launch system. A collection of these papers will appear as an AIAA document a few months from now. During the study we also had the benefit of an intensive one-week interaction with senior officials about the rationale and goals of our work. At the request of the OAST, study participants completed an extensive list of those research topics considered to be of major importance should NASA choose space industrializa­tion as a major theme.

We are particularly pleased that, as a result of intense effort by many people, the Report of the Study, consisting of about 200 pages of articles in AIAA Journal format, was delivered to NASA Headquarters by mid-October, approximately two and a half months after the end of the Study. We expect that the report will be made available by NASA in preprint form in advance of its final publication. Those interested should direct inquiries to

USRA is an association of 46 member Universities. Among other activities, it operates the Lunar Science Institute in Houston. At the invitation of USRA Prof. O’Neill has accepted the chairmanship of a new USRA committee, aimed at forming a broad community of research individuals and groups interested in space manufacturing. This group is by definition inclusive, that is intended to include all who wish to consider themselves its members. With the help of a central Advisory Board, now being formed, this Association will have as its goal the encouragement of research in all fields related to space manufacturing.

The Third Princeton/AIAA Conference on Space Manufacturing Facilities will be held on May 9-12 1977. (This Conference was announced in the September issue of Aeronautics and Astronautics, with dates shown one day later). It will be co-sponsored by the AIAA on a national level, and probably also by agencies and certain private corporations. Both technical and social issues will be addressed; a brief outline listing opportunities for contributed papers (abstract deadline Dec. 1st) is enclosed. We suggest that those who wish to attend the sessions on May 9-11 apply early, because the meeting will be limited to less than 200 partici­pants, on a first-apply first-accepted basis. Inquiries should be addressed to:

On May 12 there will be a half-day session, open to the public, followed by a press conference. This session will summarize results, but three days of previous closed sessions will be the real work of the Conference, and attendance at those days will be only by previous registration for the full Conference. (That restriction includes members of the Press.)

A small number of students from several Universities will be given the opportunity to attend the Conference without payment of registration fee, in return for work done in connection with recording and transcribing the discussions following papers. These students will be expected to arrange for their own travel, lodging and meals. Applicants for these positions should write to me within the next two months.

Since returning from California to take up his sabbatical­year appointment as Hunsaker Professor of Aerospace at M.I.T., Prof. O’Neill has been heavily involved in completing certain of the articles from the Summer Study, as have I here at Princeton. In addition, our most recent research activities have been in studies of the Apollo/Amor class of asteroids as potentials materials resource candidates, mass-drivers as reaction-engines for space, and the develop­ment of possible Space-Shuttle experiments on the long-duration exposure facility (LDEF). Although funds remain uncertain, we invite inquiries from those interested in working in space and planetary science either at the post-Doctoral level or as potential graduate students in the Physics Department at Princeton. As emphasized in our last newsletter, potential graduate-student applicants should correspond first with us, so that we can advise them as to whether their qualifications justify their making a formal request for admission.

“The High Frontier: Human Colonies in Space” by G. K. O’Neill will be published in January by the Wm. Morrow Press in the U.S., and shortly afterward by Jonathan Cape in London. This book is written in non-technical language, and explores both the near-term and more distant possibilities associated with the humanization of space.

Within the past few months a problem has arisen, about which interested friends should be informed. Although most editors are scrupulously careful about not altering written text without author’s permission, in several recent cases articles written in a careful and responsible manner have been heavily re­written and “sensationalized” without our permission and even in some cases without our knowledge. Particularly glaring examples have occurred both in English and in German within the past few months. In case you see an article over the signature of either G. K. O’Neill or myself, which does not ring true, it would be wise to check with us to be sure that it is indeed genuine. For legal reasons we refrain from listing the unfortunate examples, but will do the reverse; the following is a selected list of a few articles which we fully endorse as accurate. Absence from the list, in many cases, is only an indication that the article was too specialized to be suitable for a non-technical readership.

Space Colonies and Energy Supply to the Earth-Science, Dec. 5, 1975

It is a pleasure to thank Mr. William B. O’Boyle for critical donations which have supported our work during this period. We also thank other friends, too numerous to list, who have made contributions.
Princeton-AIAA Conference May 9-12 1977