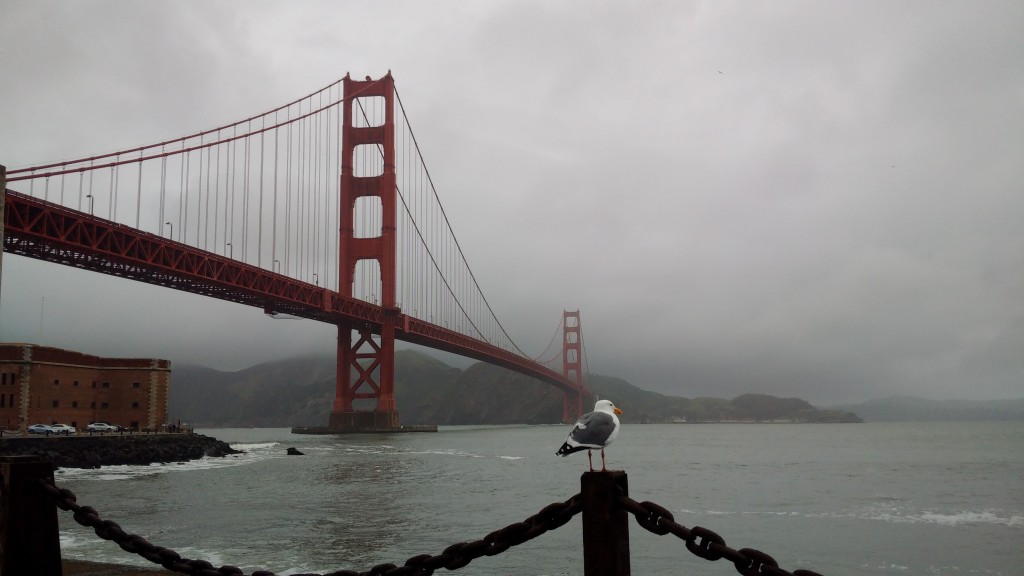 The Bay Area is beautiful this time of year. The trees in all of the parks are nearly turned and soon that legendary romantic, film noir fog will be making the Golden Gate Bridge something to be personally experienced.

If you haven’t been in a while, the architecture of “The City” has blossomed with the new Salesforce Tower (with its “Eye of Sauron”) fitting in perfectly with the iconic Transamerica Pyramid.

And, of course, there is also The Space Colony.

Long time SSI Associates may remember that in the early 1990’s a very special Island One was physically created using the original William Snow, Gerard K. O’Neill and Frank Mitola blueprints (one of those is at the top of the SSI Soundcloud Channel, notice the title in the copyright square at the lower right).  The Model was professionally made out of metals by an aerospace model company in the then very turbulent new Russia and was delivered to the United States by a special gift flight on the Martin Marietta corporate jet.

Sadly, the model was finished and delivered after Gerry O’Neill had passed away so he never got the chance to see it for himself, and, sadder still, shortly after that… it vanished.

There is a long story behind its finding its way back home, one of intrigues, late night negotiations, clandestine parking lot meetings, white envelopes and unassuming boxes. It’s a story that Indiana Jones would find entertaining and I am very tempted to tell it here, but that part of the story is best for a one to one face to face with no record.

The end result of all that “librarian work” is far more important:

You can see “The Model” with nothing separating you from it, right now in San Francisco.

Ok, just a little bit of the story: I can tell you that after the pieces of The Model were in the possession of SSI, they were not in perfect display condition. Its 27 year journey had taken a toll and restoring it would be at a real monetary cost. While it was a very important artifact in the Space Studies Institute history, we try to keep with the founding goals of finding and *finding ways to fund* real, tangible technologies for The High Frontier Concept to become a reality. Money for such important projects is hard enough to get people to offer from their personal expendable incomes, so the model had to wait.  As SSI Second President Freeman Dyson smiles to hear us swear, “SSI should never become a museum of a future that never was,” and as Gerard K. O’Neill quite often directly stated to possible investors in their own futures, “The Space Studies Institute is not a Gee-Whiz Society.”  So the boxes of pieces were secured and tucked away in hope of  some future opportunity.

That opportunity came earlier this year when SSI got a call from Joseph Becker, Associate Curator of Architecture and Design at the San Francisco Museum of Modern Art (SFMOMA). Mr. Becker was working on a new exhibit called “Far Out: Suits, Habs and Labs for Outer Space.” As he was putting together this special exhibit, he had begun to see that The Vision of Gerard K. O’Neill was a centerpiece of it all and while the NASA Ames Center had contributed those historic and amazing Rick Guidice and Don Davis Summer Study paintings it would be really nice if Gerard O’Neill’s own organization had something to add. Robin called the location of the boxes, they were unsealed and, very carefully, The Model was assembled so that Mr. Becker could take a look. He was happy with what he saw. 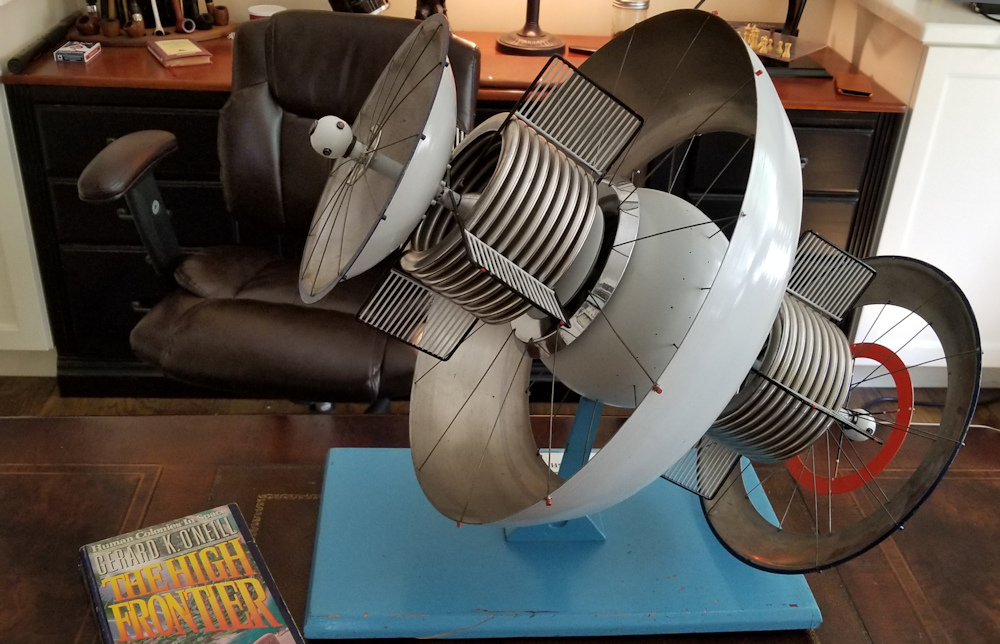 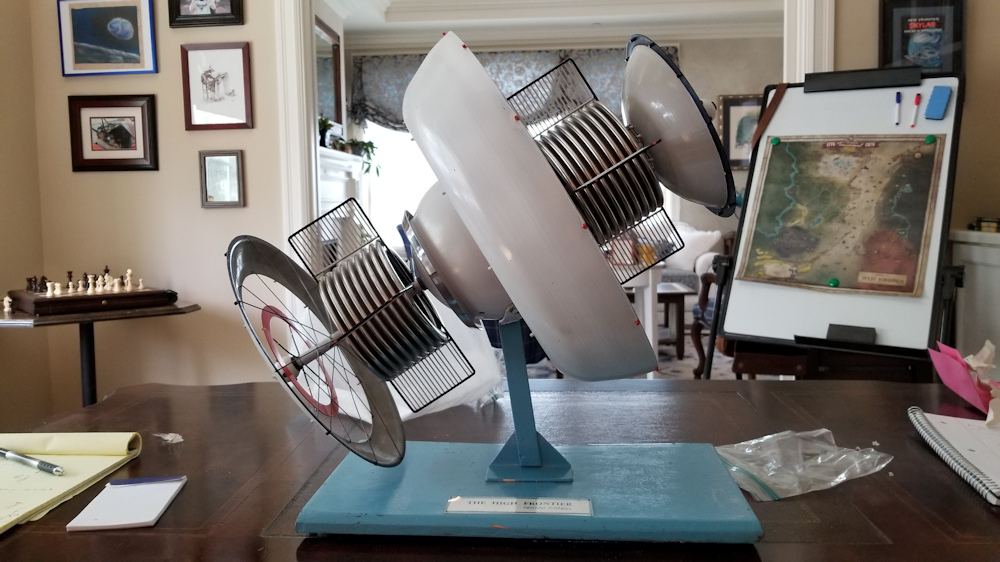 SSI told him the whole story and pointed out that while The Model was mostly intact it was a very precarious assembly. Along with the scuffy and patinaed mirrors, there were two missing tension cables and the Agriculture Rings were – ironically – only being held on the end cores by gravity. The original spot welds had eroded and the trusses needed some tender loving care to get them back to display condition. Mr. Becker said, ‘Don’t worry, I know people.’ 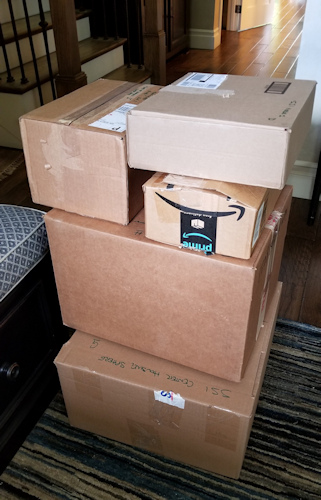 The boxes were re-packed and delivered to SFMOMA where Joseph introduced them to Assistant Curator Anna Lau, Associate Conservator Ellie Ohara and Head of Conservation Michelle Barger.

Ms. Ohara took the parts and made them whole again. And you should see them now. You really should, and you really can. 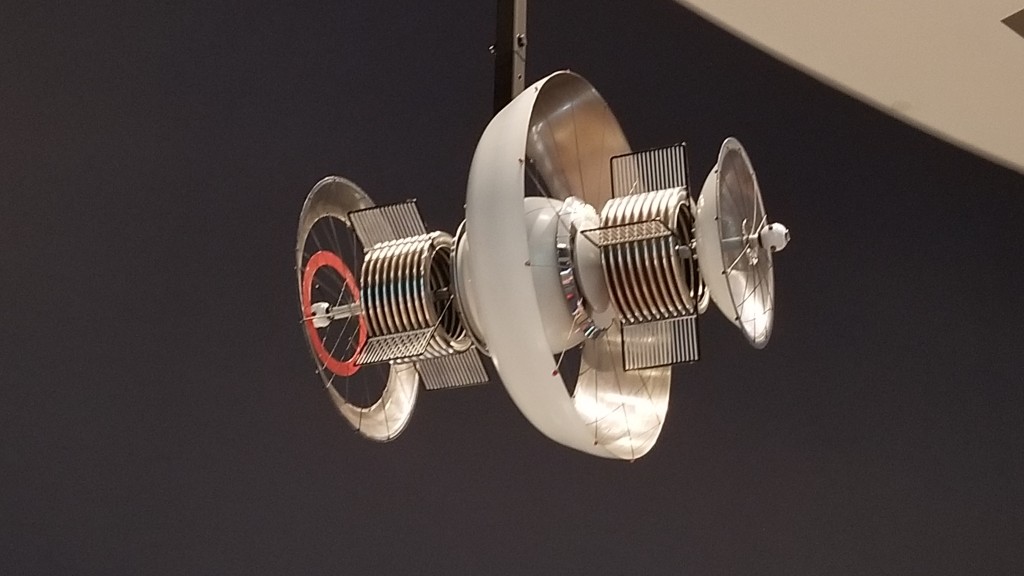 SSI is made up of mostly Technical people and when many technical people fly into SFO they Uber south on the 101 for the 20 minute drive to Silicon Valley, usually too busy to take the 15 minute ride north into The City. But if the holidays are a time of travel by choice and Northern California fits your family budget, consider the seafood and aquarium down at Fisherman’s Wharf, a choppy spray ride out to the dark history of Alcatraz, a traditional Japanese Tea or visit to the Academy of Sciences planetarium, indoor rain forest and living roof in Golden Gate Park, walk to the nearby Panhandle Park where The Grateful Dead, Jefferson Airplane, Janis Joplin’s Big Brother and Jimi Hendrix all made history… but do not forget to head down to 151 3rd Street, to SFMOMA.

Save money and look smart by parking in the locals garage right around the corner at 147 Minna Street, then walk back to 3rd, enter the main museum entrance, go up the escalators to pay the surprisingly low admission, turn around to the left and take the elevators to the 6th floor.

“Island One. The Real Model.” Part of the exhibit “Far Out” running only until January at the SFMOMA. 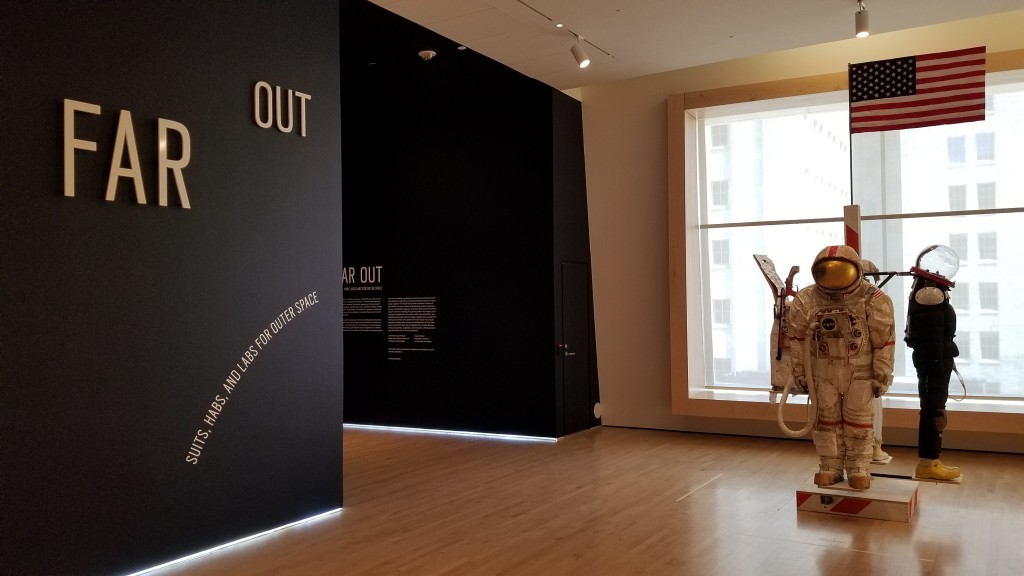 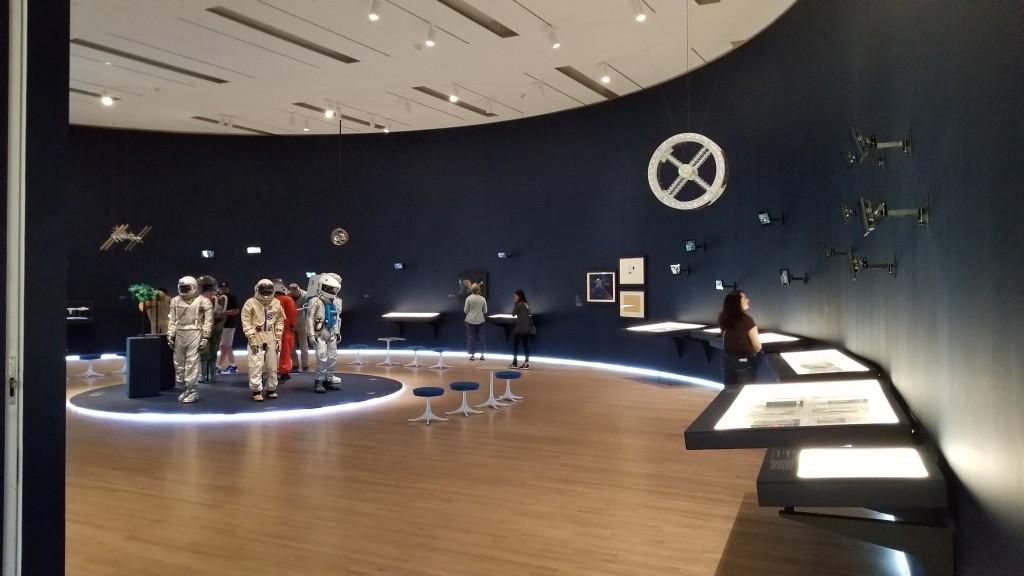 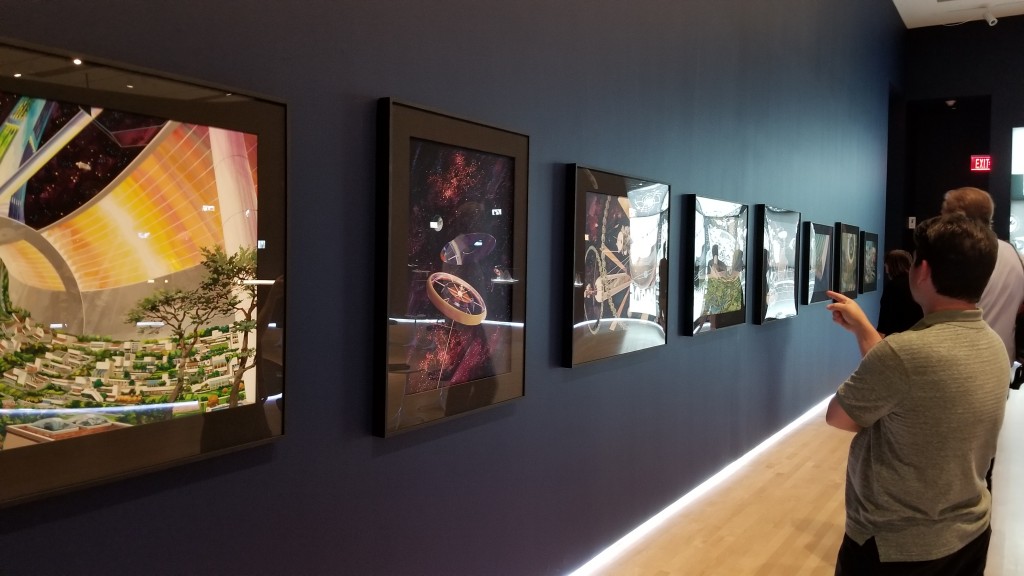 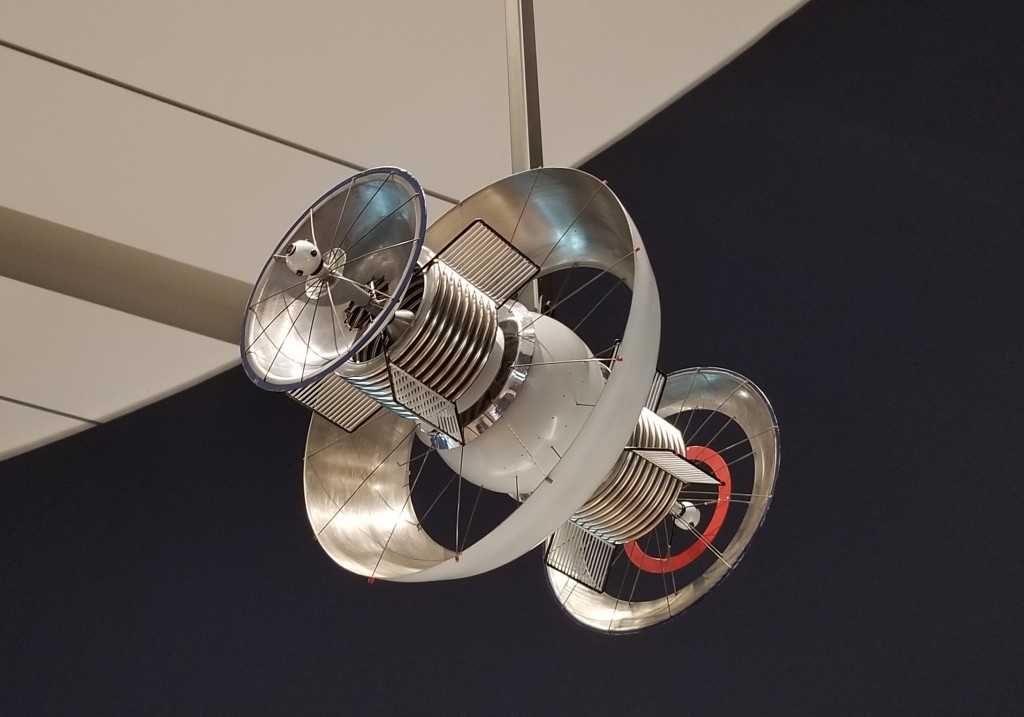 Get more information on Far Out: Suits, Habs and Labs for Outer Space from this SFMOMA link.

Bernal Sphere, Island One?  Which is it?  Both.

“Imagine a spherical shell ten miles or so in diameter, made of the lightest materials and mostly hollow; for this purpose the new molecular materials would be admirably suited. Owing to the absence of gravitation its construction would not be an engineering feat of any magnitude. The source of the material out of which this would be made would only be in small part drawn from the earth; for the great bulk of the structure would be made out of the substance of one or more smaller asteroids, rings of Saturn or other planetary detritus. The initial stages of construction are the most difficult to imagine. They will probably consist of attaching an asteroid of some hundred yards or so diameter to a space vessel, hollowing it out and using the removed material to build the first protective shell. Afterwards the shell could be re-worked, bit by bit, using elaborated and more suitable substances and at the same time increasing its size by diminishing its thickness. The globe would fulfil all the functions by which our earth manages to support life. In default of a gravitational field it has, perforce, to keep its atmosphere and the greater portion of its life inside; but as all its nourishment comes in the form of energy through its outer surface it would be forced to resemble on the whole an enormously complicated single-celled plant.”

“Bernal Sphere.” You’ve heard that phrase billions and billions of times. Very likely when you’ve heard it you got the picture in your head though, of an O’Neill “Island One.”

Back when nuclear physicist and Princeton Professor Gerard K. O’Neill was just getting into the distraction of the numbers of “That space stuff” his friend Freeman Dyson pointed him to the writings of Konstantin Tsiolkovsky and to “The World, The Flesh and The Devil” by J.D. Bernal.

As those real numbers started to make sense and a real design started developing O’Neill didn’t forget that source and he related the design of what we now see in our heads to the previous visionary by coining the term “Bernal Sphere.” As you can see in the original 1929 essay text, a true Bernal is not exactly the same as an Island One, it’s got a fair bit of Dandridge M. Cole to it and lacks many up-to-the-space-age parts, but when O’Neill humbly paid his homage, it stuck.

We think both of the men would be happy about that.