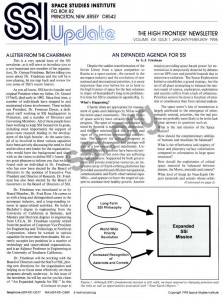 We were just wrapping up the conversion of the January/February 1995 SSI Update and recalling how that was a bit of a jolt to some of the general membership (SSI Senior Associates had been previously informed).

In that one issue of the newsletter Dr. George Friedman (Corporate Vice President for Engineering and Technology at Northrop Corporation, Adjunct Professor in Engineering at the University of Southern California) was named to the board and was presenting his expanded vision of NEO research for the Space Studies Institute.

NEO studies had been, of course, a part of SSI’s efforts for several years, but Dr. Friedman saw expanding the work as being a great benefit to SSI and as an important piece of The High Frontier big picture – while not one that may have been top-of-mind when Gerard K. O’Neill started his investigations decades earlier at Princeton.  After all, Shoemaker-Levy was not on any form of radar in 1976, but in 1995 that story and its implications were bringing NEOs far closer to all of our homes.

We hope you’ll head over and visit the SSI Newsletter Archive and read this issue and Dr. Friedman’s arguments because the consideration of SSI’s role in relation to the Human Habitation of Space requires bringing all thoughts to the table and assessing them in order to prioritize the directions for your Senior Associate pledges and other – greatly appreciated – contributions.

The link to that SSI Update issue is now available in the newsletter Archive, just scroll down to the bottom of the list.

You might be interested in how Dr. Friedman’s efforts evolved over time. Keeping track of the SSI Update Archive will help – we’re nearly done with the conversion of the SSI Update which followed that one (it was the first of the Quarterly releases of SSI Update so it is a long one, with three O’Neill articles, a piece by Dr. Friedman attempting to ease some concerns, and a reprint of the Aviation Week and Space Technology magazine article on the SSI Air-Spike experiments by SSI’s Dr. Leik Myrabo and Yuri Raizer), that issue should be ready for posting in the Archive in a few days.

[[4-18-2016 addendum: It has been asked if SSI’s Dr. George Friedman is the same George Friedman who started the Stratfor global intelligence organization.  We see the confusion because there is a well-known video interview with that George from 2012 after the first SpaceX ISS rendezvous where that George talks in very positive terms about Asteroid exploitation and Space Solar Power.  However our Doctor George Friedman is a different person.]]