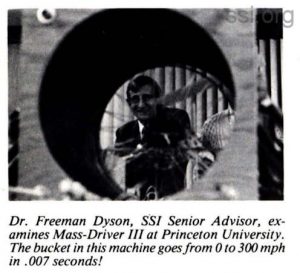 For instance, there was a review thread that said:

“Although I too found the book only a back of the envelop kind of affair, without a gigantic amount of detailed analysis, and an almost religious adherence to using “Solar power”, constantly excluding nuclear fission systems, for no sound reason. …”

I pondered that thread for a while, then, as just another reader, not as a official member of SSI making an official PR statement, I typed a bit.

I pass that reply to you here and ask you to join the conversation… you can comment right here or you can go over to the Amazon.com High Frontier Kindle edition page and add your point of view.  Doing it here is nice, doing it there might hit a wider audience, it’s your choice.

“I truly enjoyed reading this whole thread, very good points are made by the reviewer and commenters… I do have to mention, however, that the “back of the envelop[e] kind of affair, without a gigantic amount of detailed analysis” is, as I understand the history of the book, by design.

This book was written to be for the mass audience to get an inkling and interest but not to scare them away, and so the writing is not too technical on purpose.

The book was not the first appearance of the High Frontier Concept, the first public documentation was in Physics Today September 1974… good luck buying a copy of that but you can read the full article, reprinted very nicely by permission of the journal on the National Space Society website, google “Gerard K. O’Neill nss” and it should be near the top. You’ll find a bit more math in the original… and if you like that there’s a boatload more, I assure you.

A commenter stated that he worked at XCor – Go Lynx! – and so, being in the same office park as The Space Studies Institute at the Mojave Spaceport he probably knows but I can let you know too, that there is a huge amount of deeper technical research data for those who wish to see it (SSI was founded by O’Neill and, full disclosure, SSI played a small part in the startup of XCor – because funding the elements that will add up to The High Frontier is part of our purpose, by our charter).

SSI has had 15 major conferences since 1974 and the thick hardbound Princeton/SSI/AIAA proceedings of those conferences still sell for unfortunately sky-high prices not because they are collector’s items but because the data remains valid. Our Associates and Advisers join because of the data and/or because they like to personally work on hardware that matters AND they aren’t all a bunch of complete nitwits (maybe a few of us but not all): Burt Rutan, Peter Glaser (Inventor of Solar Power Satellites), Bill Brown (Raytheon Labs, first to prove wireless power beaming at a distance and still called the Father of the science and engineering involved), Peter Diamandis (SSI assisted in the creation of the International Space University and O’Neill was on the ISU board for many years), Thomas O. Paine, George Gallop, Jr., James Vedda, John Lewis, John Mankins, Gary Hudson (Rotary Rocket was a crazy idea but that big machine flew with two pilots and out of it came XCor), Jim Muncy (I LOVE his note on O’Neill and Sagan in one of the 1992 SSI Newsletters!), and on we can go dropping names… in any case, you can find more, detailed engineering reports by some folks who may be considered somewhat knowledgeable (enough to satisfy, I am positive) by visiting the Space Studies Institute site… under the “Reading” tab you will now see a “book” that should assist as we have just started uploading the Archive of the SSI Newsletters.

Detailed technical heft you want? SSI dot org is where you can get it.

And you may find that because the organization continued(s) far beyond the day that everyone woke up about the limitations of the Shuttle, O’Neill was right out in front of that issue. Yet, as was the way of the guy, instead of raging and ranting and pointing fingers… he pointed out the problem faster than most others and said in person and in letters to the SSI membership, ‘ok, that’s how it is, let’s get to work.’ SSI and MIT (under O’Neill’s direction) created three working Mass-Drivers with the last model hitting 1800 g’s (“rail guns” are what the military got out of all that work, but a Mass Driver is not a rail gun), these were not vaporware, they were demonstrated repeatedly in front of audiences, on PBS NOVA, before California State officials.. even on two episodes of Nimoy’s In Search Of! (Don’t laugh at that last one… remember that O’Neill wanted regular people to “get” this so he, like Willy Ley and von Braun did before and Elon correctly does now, took the message to the people where they were instead of sticking only to closed elite halls of hallowed science.)

And this guy WAS a real scientist, a renowned nuclear physicist of pretty high caliber in High Energy Physics. Storage Ring technology was called pure hooey by the experts when he first presented it in two succinct pages in Physical Review in 1956, but a few years later he came out of his Stanford and Princeton labs with a working model and a patent … and now nearly every major high energy physics lab uses one and most every working accelerator is based on it. Hooey, it was? I walk past the Stanford Accelerator (SLAC) field in here in Menlo Park a couple of times a week and I just have to wonder how the experts felt when he calmly said ‘Excuse me… may I show you two beams?’ :-).

To summarize, The High Frontier was not a one-shot thing, it was written to let normal folks get the picture, “The Vision”, and to get excited about it – because in the times when the experts are all calling for cutting back and limiting everything it IS exciting to hear that there is another side of the coin worth giving some ink and some honest, open consideration. If readers aren’t interested then that is absolutely fine, but if they are piqued and if they chance a look at the organization that O’Neill started for them they’d see there was more to consider… and it’s all there for you right now. If you’re interested.

Please remember, READING the book and hopefully other resources on Settlement, SPS and the spins on Space Manufacturing is important. Commenting on the books in the pro and the con and starting discussions that others can contemplate is all great too. But if there’s anything that I think would truly make the book worthwhile it would be that folks were taking the next step: *Making Something Themselves.* Just as O’Neill first did the maths but then went into Engineer mode and made the hardware rather than wait for someone else to do it… that is what is needed to make the High Frontier or any big idea more than just a bunch of pretty pictures. The experts will always stick to comments of why and how an idea is silly or impossible… showing them the working gear is the best way to make the “that’s just too big for us here in the real world” guff and the lamenting for our lost futures fade away. Space gets laughed at by experts all the time, always has, but Space is far bigger than all we will get from all of Earth so I don’t get that. Elon takes Mars very seriously and he is going there… but the experts all seem to think that it is some trick he’s using simply to get big on Earth, a writer in Fortune recently predicted that he was doing it all just to take over Apple… they don’t get it and they never will even when he or some kid he influenced is waving at them from Mars. The New York Times only retracted their incorrect views of Goddard when astronauts were half-way to the moon (49 years they held firm that it was all impossible).

If you get it, then do what O’Neill and Disney and von Braun and other now-famous names did, make something physical. Plumber? Make a demonstration of how pipes move liquids in a rotating environment, the effects of the different directions of the pipes in relation to the spin; Basketball your thing? Work out the trajectories that a player would have to deal with to grow muscle-memory for if the court was parallel to the spin or perpendicular, including half-time switches, show us the diagrams, find a way to test some people with an analog setup. In the High Frontier there’s a mention of the couple of farmers who joined up and did research on proteins required by humans and published a paper on why rabbits would be the best choice for a primary food source in a closed loop system.

Yes, it is great to have the PhDs but when something isn’t already a bureaucratic sloth, anyone with an idea and some time at a workbench is of equal or higher value if they can come up with a piece of a puzzle.

You like the book? Great, it was written to be a starting point, not to be the end of the road. If nothing else, set out to prove it all wrong, one point at a time – using actual demonstration hardware – and if your facts add up then SSI will tell your story; People have been shooting holes in The High Frontier for decades now within the ranks – that is encouraged, and each time it has made the membership rise to eventually figure out a fix or an even better idea. It is stronger for the work. Don’t just comment… “make a benefit.”

Getting regular people thinking and then digging in and working on a solution to big problems is the reason, as I see it, that O’Neill wrote the book exactly the way he did.

2016 is a special year for The High Frontier, in the digital age Kindle is one of the widest-used ebook options, working across devices and operating systems.  We hope that your investment in SSI by a purchase for yourself or as a gift for a friend will help bring about a re-discovery of the power and excitement of this foundational book of the Space Industry.

In fact, why not do it right now?  Just click right here!