My friend and sometimes colleague in matters aerospace, Dr. Jerry Pournelle, passed away quietly in his sleep this past Friday, age 84.  Aerospace engineer, author of The Strategy of Technology and dozens of science fiction novels, raconteur, and Chairman of the Citizen’s Advisory Council on National Space Policy from 1980-1994, he was an intellectual of many talents and real humanity.

Those of us who seek to open the space frontier to all humanity owe Jerry a debt of gratitude for life well lived promoting all things space and particularly for his decade-long effort to solve the problem of low-cost access to space.  He well understood and oft repeated Bob Heinlein’s famous dictum: “Once you are in low earth orbit, you’re halfway to anywhere.”  It took years, but Jerry managed to cajole a cantankerous Council of headstrong individualists into supporting what became the DC-X program, and then took that mandate into the office of the Vice President of the United States, with two other now deceased cold warriors, Max Hunter and General Danny Graham. The result of that meeting opened the door on a new space age.

I’m particularly proud of the part I played in helping his Citizen’s Advisory Council reach the decision that reusable spaceships should be a national goal, but I hope Jerry gets more recognition of the role he played in death than he did in life.  The current explosion of commercial space ventures owes much to his pioneering efforts, for example.

Jerry opened each of eight annual Council meetings with the words that he crafted for the cover page of each report that used to land on President Ronald Reagan’s desk:

“The statesman who leads humanity into space to stay will be remembered when Isabella the Great is long forgotten.”

It’s both ironic and profound that his last written words, on his Chaos Manor blog, were “Bye for now.”  Goodbye forever, old friend, and thanks for helping us take a first faltering step on the road to the stars.

The public memorial service for Jerry Pournelle will be held at noon Saturday September 16 at St. Francis De Sales Church located at 13370 Valleyheart Dr, Sherman Oaks, CA 91423. Please spread the word to those that would like to attend. We will try to livestream the service for those that can’t attend. Many thanks for all your well wishes. My family is very touched by your thoughts and prayers.

In the Bay Area? Join President Gary C Hudson at the Hacker Dojo in Santa Clara on Monday Feb 27th

As part of the TechTalks series, jointly organized by the Silicon Valley Space Center and the AIAA San Francisco Section, Gary will be presenting “SSI and the High Frontier”

Limited space, so get your tickets in advance using the EventBrite link

“Silicon Valley Space Center (SVSC, http://www.svsc.org/) provides business acceleration, strategic direction and angel level funding for startup companies within the growing NewSpace industry in Silicon Valley. We assist start-up and early-stage companies with the commercialization of their innovative products or services. We regularly host events and workshops to bring together the vast array of entrepreneurs, scientists, engineers, and investors who share a passion for shaping the future of space exploration.”

It is common at conferences and meetings to hear folks casually mention that, unlike other established entities, The Space Studies Institute is not a political organization.

That isn’t exactly the full truth.

A key difference between SSI and some of the other Space related organizations is that we are not a lobbying group, but as Robert Heinlein wrote in Podkayne of Mars: “Politics is just a name for the way we get things done… without fighting.”

Because The Space Studies Institute was founded to be an active participant in the getting of things done the workings of politics always have been acknowledged, occassionally have been acted upon quietly, and sometimes have been taken on openly as parts of the whole of our activities.

Back in 1991, Gerard K. O’Neill found it important to speak openly and very clearly about a governmental situation related to the Humanization of Space. That speech was printed in the proceedings of the 10th SSI/AIAA Space Manufacturing Conference at Princeton (Space Manufacturing volume 8, Energy and Materials from Space) and because its *Point* is just as relevant right at this moment in time as it was when it was written, we wanted to offer it to you.

Here’s the thing though, because of another current project we already had the equipment set up and so decided to present this in a form that you can take with you and “read” while accomplishing other things in your busy life. Please use the link below to download an mp3 audio file of this short O’Neill speech for playing on your smartphone, tablet or computer.

This is NOT the voice of Professor O’Neill. I truly wish that it was, but we don’t have a recording of his presentation so we did our best with a “reading.” It is our hope that the read does justice to the message and that those who knew Gerry personally take no offense to any parts where the voicing strays from his unique style. I plead guilty to being deeply affected by the message, and the way that I spoke it comes from the heart with sincere respect.

Click here for mp3 audio file (19mb).  To avoid your browser being helpful and playing the file directly, Windows users can right-click and Mac users can control-click this link to choose a “Save As…” download option. 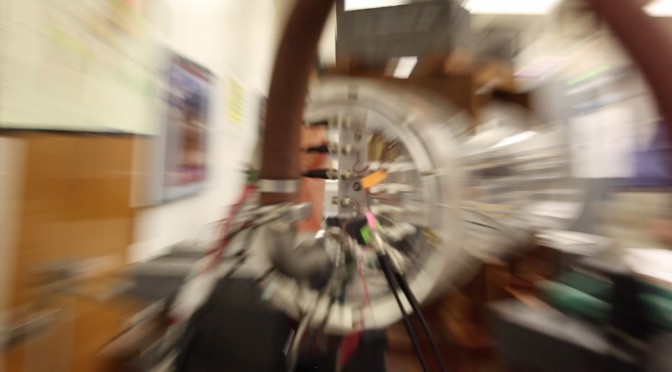 This blog post from 2013 is just the tip of the iceberg. See the SSI Programs page for the latest information on SSI’s Exotic Propulsion Initiative

Update 11/24/14: Welcome BoingBoing Readers!
Strange thrust: The unproven science that could propel our children into space by Charles Platt

Help us reach our goal of raising $42,000 to provide the Woodward Lab at CalState Fullerton the new instrumentation, computers and power supplies that Emeritus Professor Jim Woodward and his colleague Professor Heidi Fearn need to continue their research on Mach Effect propulsion! Please donate (tax deductible) using the button below.

SSI has always prided itself on focusing our resources on projects that work to provide technologies that further the cause of space settlement and permanent life off Earth.  We’ve announced two efforts, the G-Lab and the E-Lab, to provide technologies required for understanding the amount of gravitational force and practical closed life-support systems required for long-term or permanent human habitation in space.

To these projects we have added the Exotic Propulsion Initiative, to explore exotic propulsion opportunities at the very borderlands of physics.

Much public and press excitement has been generated by the DARPA-funded “100 Year Starship” effort, and work on warp drive theory and concepts at NASA’s Johnson Space Center.

While no one can predict if or when these technologies might become practical, we can say for certain that not funding basic research will consign any breakthroughs to the realm of science fiction forever.

Accordingly, SSI has established our Exotic Propulsion Initiative to take bold new risks that are unlikely to find conventional funding.  Donations to the project will be first used to extend and replicate Professor Woodward’s provocative research findings at his lab at CalState Fullerton, and as resources permit, to open new avenues of exploration into advanced propulsion with other scientists.

Professor Woodward has donated major royalties from his book to SSI in order to jump-start this project’s funding.  We are grateful for his donation and are very pleased to be able to offer an opportunity to all interested parties to extend and increase his gift.