Professional organizations release conference videos for folks who couldn’t make the trips themselves, but professional viewers have to remember that there is a human downside to having a bunch of sessions dropped all together on the internet.

Many of us have trained a neural path habit into our brains by years of streaming video; Funny cat antics have trained us to expect laughs every 15 seconds and Netflix binging of entire seasons of The Office in a weekend have trained us to think it’s okay leave something on in the background while we do other stuff around the room.

Watching professional conference videos in those habitual ways doesn’t give a real payoff, because the reason for the recording was different… but those streaming habits are so very hard to break.

As you watch the SSI 50 conference recordings, and any professional conference recording, it’s best for you to approach the watching in the same way that you take on a university online class. Set the time, and watch for the points. The professor may start meandering, some other student might ask a tangential question that gets things out of focus (a camera may go out of focus!) but you know that something in that 2 hours may be on the test. And, more importantly, something that you see – that it seems no one else in the audience had spotted – may turn out to be the unique core of your post doc or professional trade career.

There are 11 videos, 12 hours and 46 minutes of produced content, in the SSI 50 YouTube Playlist (plus the “Working Today” PSA). Take the time for them. Make the time for getting the most out of them, For Yourself.

The complete list of SSI 50: The Space Settlement Enterprise video recordings is now assembled for researchers at the SSI.org content page:

About three quarters the way through the final panel session of the final day of SSI 50, two attendees quickly ducked out of the Allen auditorium to refresh their coffees. As the door eased closed behind them I heard the one man’s exasperated words, “Sheeesh! Robots, AI, Military! Where’s the Humans?!”

For the rest of the talk and during the long drive home, I have to say that I felt the same emotions as that man about this session.

In putting together the video, going through the angles second by second, rewinding and replaying over and over, the words of the other person in that overheard exchange started coming back to me. Just before the door had shut and over the din of the museum public visitors, she had said to him, “No, there was a nugget in…”

A good word for a session on the quest for the gold that will make Space a place worth living.

The final session of SSI 50: The Space Settlement Enterprise gathering held at the Museum of Flight in Seattle September 9th and 10th, 2019 is about the ways to pay and to make it pay.

The original High Frontier platform, envisioned during the peak of the American energy crisis of the 1970’s, put Dr. Peter Glaser’s invention of Space Solar Power Satellites as the primary revenue source for LaGrange area communities.

In the end, short of a miracle substance, SSPS will be the way an advancing civilization powers its survival. Eventually it will be obvious to everyone that digging up and pumping out the remains of ancient solar energy from the ground is silly when you can get to the unlimited pure, live source in just 8 minutes.

But will that happen in a time that we all live to see? Will it be required for our “O’Neill Colonies” to be built? And even if SSPS goes live in a very big way, didn’t we learn from Enron that putting all of your stock into just one bucket, energy or otherwise, can be a dangerous idea?

After a short intro, Dr. John Mankins, Founder of Artemis Innovation and undisputed living expert on SSPS gives us a status report and his view of the relatability that SSPS now has to Space Settlement. This portion, with occasional refocusing to the topic, runs about 50 minutes.

Then, the whole panel of Dr. Mankins, Eva-Jane Lark, VP of BMO Nesbitt Burns, and Dr. Philip Metzger, Planetary Scientist of the Florida Space Institute of the University of Central Florida, join together to discuss other revenue options.  Don’t expect a big finish ending with a single slide showing “The Ultimate Product!”, this remains the toughest nut to crack.

Most of the SSI membership is comprised of Engineers and Scientists, and while Gerry O’Neill was both of those, he was also a businessman.  It’s our turn now. TANSTAAFL. 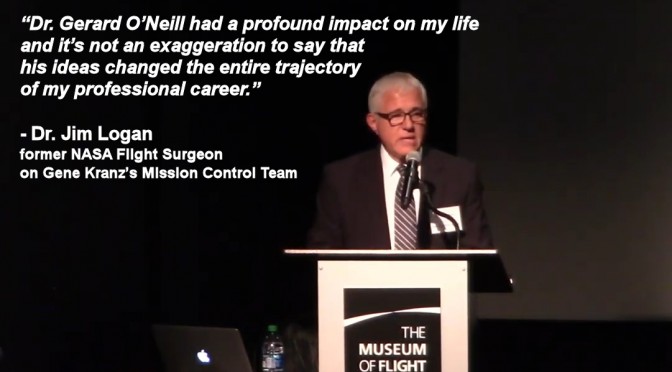