This joins part 2 (Dr. Frank Chilton on Mass Driver Acceleration) and part 1 (Dr. Gerard O’Neill with an overview of the Summer Study).

We hope that you and your team make the time to listen to these previously unavailable – thought forever lost – recordings.  The 1976 Summer Study’s focus on Mass Driver Technologies was a unique engineering milestone in the industry, and the math has not changed.

Part 4 of the series should be coming in a matter of weeks, get caught up now, at The SSI SoundCloud Channel.

If you had a chance to view the SSPS and Economics video release from the recent SSI 50 gathering in Seattle, you may have noted a question about recent work being done on SSI Mass Driver technologies.

Well, in case you missed this article… Leonard David wrote a short Space Insider piece on Mass Drivers on Space.com just a few months ago. It includes a nice mention of the Space Studies Institute background and you can read it right now via this link to Space.com. 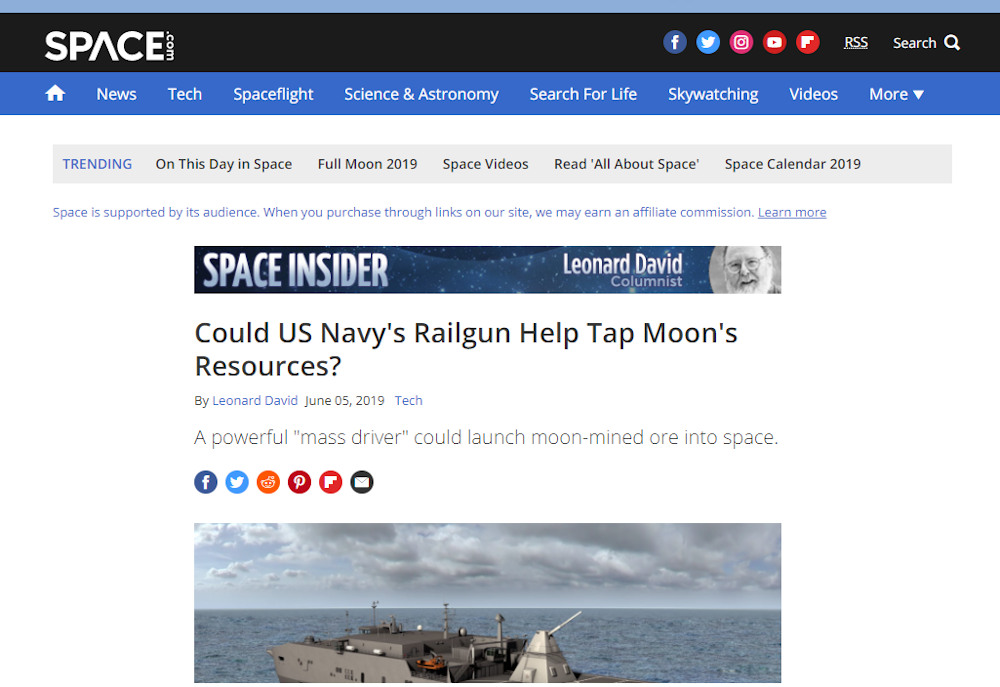 Space Studies Institute Founder and First President Gerard K. O’Neill was the one who not only coined that now popular term for MagLev linear payload accelerators, but also one of the folks who spearheaded the first real work for the technology to get around the major issue of launch costs for freespace construction materials.

If you want to learn a little more, the new SSI Soundcloud Channel has begun releasing recordings from the 1976 Summer Study where Mass Drivers were a primary topic, and also there are a few Mass Driver videos on the SSI YouTube Channel including the one introduced by Leonard Nimoy that shows test firings of MD-I, MD-II and MD-III.

Along with the popular Heinlein novel “Moon Is A Harsh Mistress” connection mentioned by Mr. David, engineering and literary historians might find interesting the 1937 Princeton University Press book “Zero to Eighty: Being My Lifetime Doings, Reflections and Inventions Also My Journey Around The Moon” by Akkad Pseudoman (copyright named to E. F. Northrup)  and the story “The Moon Conquerors” by scientist R. H. Romans in the Winter 1930 issue of Hugo Gernsback’s Science Wonder Quarterly. The latter reference (shown below, mind my fingers) launched rockets, but that picture is quite fascinating. 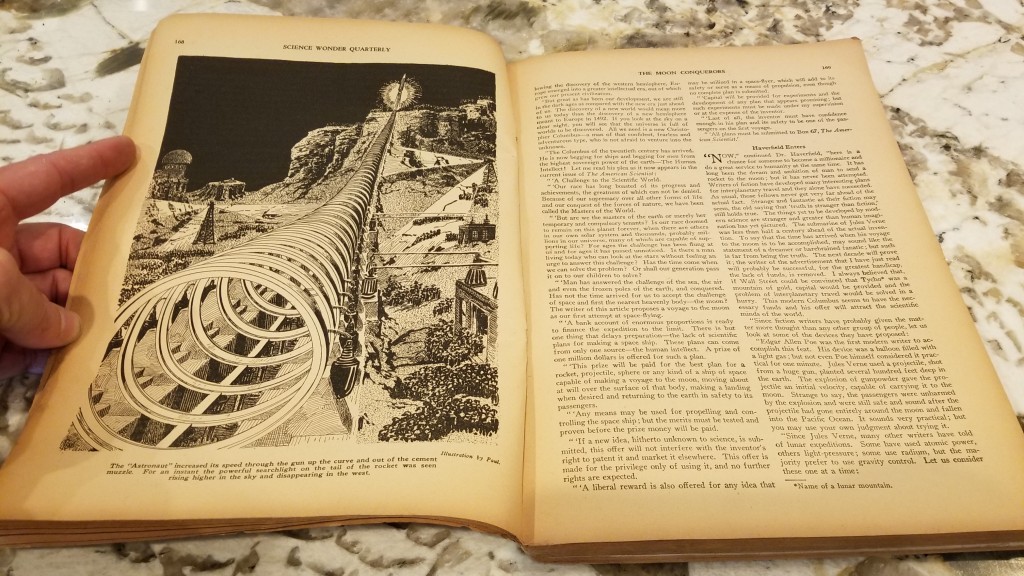 More recent writings include “Spaceships of the Mind” by Nigel Calder from the BBC documentary of the same name.  That book includes many unique photographs of the O’Neill/Kolm team at work.

And then there is the hard to find, but perhaps most technical of the non-classified engineering books: “AIAA Progress in Astronautics and Aeronautics Volume 57: Space-Based Manufacturing from Nonterrestrial Materials” edited by Gerard K. O’Neill, Brian O’Leary, Assistant Editor.  This book is more commonly known as “The Yellow Mass Driver Book” and you can very occasionally catch copies at somewhat realistic prices from sellers who don’t do their own research via this Amazon.com page: https://www.amazon.com/Space-Based-Manufacturing-Nonterrestrial-astronautics-aeronautics/dp/0915928213.

More information on ‘the yellow book’ is in the introduction to the first of the 1976 Summer Study recordings currently being released on the SSI Soundcloud Channel.  (Now that the SSI 50 videos are completed we hope to get back to the SC releases very soon.)

And of course, quite a bit of the true story behind the making of the working Mass Driver hardware can be found in a very readable way in the book “The High Frontier” (available exclusively at Amazon.com in Kindle and new SSI 50 paperback release, by clicking this link).

Need more?  There’s a touch of the Mass Driver and related technologies’ benefits to Humans who choose to live well on the Earth in the Gerard K. O’Neill book “2081: A Hopeful View of the Human Future” (released by SSI on Kindle a short while back, you can get to it via this direct link to its Amazon page).  You may have spotted “2081” being mentioned at the very end of the very last SSI 50 conference video, but you had to look close.

And the SSI Newsletter collection has many Mass Driver details from their moments in time and there is even a working person’s story of touching Lunar Mass Drivers in the Omni Magazine article original draft here on SSI.org.

All sound too ‘engineery?’ Would you like to really understand the basic concepts right at your kitchen table?  Make a tiny, working, one coil Mass Driver yourself!  Former SSI Executive Vice President Dr. Richard Woodbridge, III shows you how at this SSI.org page (with video, it’s really easy).

Wow, that’s a lot of good links to get a person started.

To get back to the SSI 50 questioner about ‘any current work,’ we have to add this to the Leonard David Space.com article at the top of this post. A short while back, an SSI Researcher was funded to assemble MD background information and they spoke to a couple of the members of the original MIT and SSI/Princeton teams. That same sort of question was asked…

‘All was going gangbusters and then, aside from SSI Newsletter pieces asking folks to please pitch in…  just a few dot mil papers and then nothing. What happened?’

One of the men, still doing physics professionally, casually replied, in essence:

‘When the military came in, I just had to get out.’

Now, let’s all be professional and be careful about those conspiracy things, they are a slippery slope even when you see them coming.  But we did find that an interesting anecdote.

We hope the links above whet your interest. Go find more sources and remember to let your Institute friends and colleagues know of them.

It is never too late to help a fundamentally good thing get back on the right track.

One thought on “SSI Mass Drivers on Space.com and elsewhere”