***The SSI Kindle Edition Free giveaway promotion ended September 10th. If you missed it, the price is just $6..99 USD, a minor investment in a major future!*** 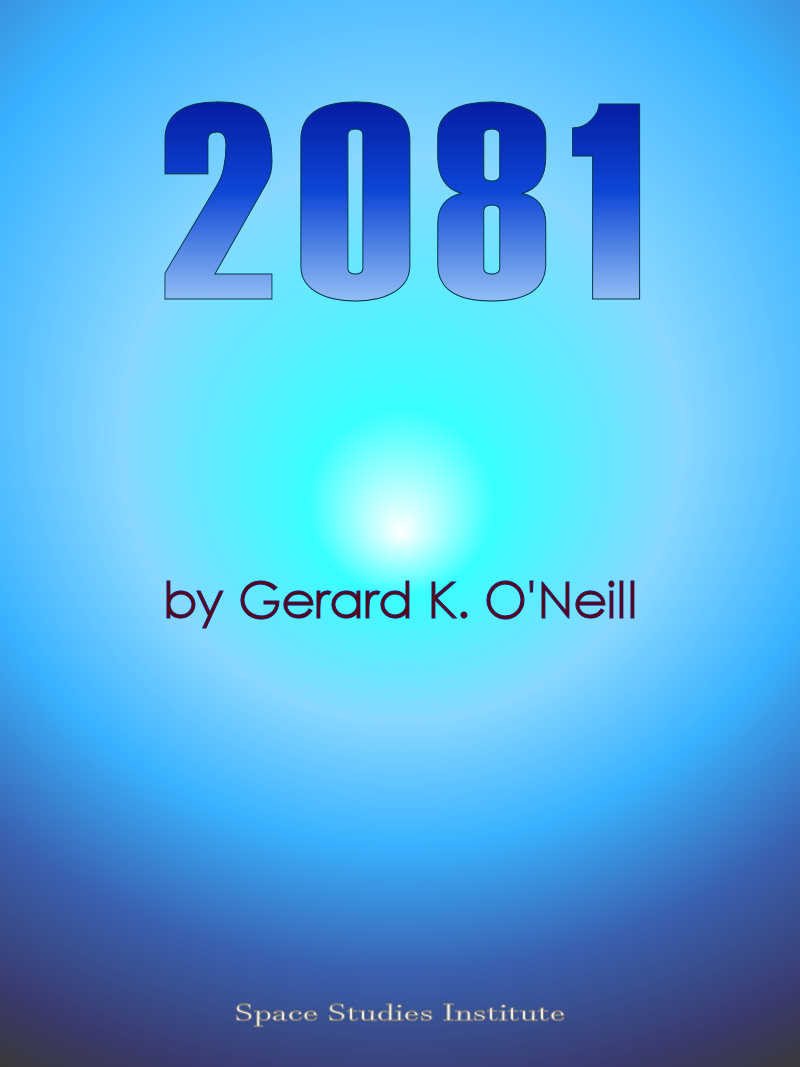 Gerard K. O’Neill’s The High Frontier is a classic of the Space Industry. World famous, it has been called “the book that launched a thousand Space careers.” 2081 may be lesser known but, believe us, it is no less fascinating or important. Here is the description we have put on the Kindle edition Amazon page:

E Ink slate tablets instead of paper books, grocery stores that let you check out without stopping for a cashier, instant as-needed delivery of any item by intelligent systems, electric cars that go where you tell them without your having to pay attention, super-fast and silent underground public transportation that people actually enjoy riding, whole communities enjoying island climates in the middle of snowy winters, working from home with all of the human interaction of going to a job, carts that politely follow you carrying your loads and ready to guide you when you’ve lost your way, houses that listen and are always ready to answer any question or organize any part of your life, cheap energy to fuel every device without adding to the carbon, heat or disposal issues of fossil and nuclear fuels. This is your world in 2081.

Princeton Nuclear Physicist Gerard K. O’Neill, most famous for revolutionizing high energy physics labs and particle accelerators with his invention of Storage Ring technologies, and for his view of the potential for thousands of regular people to enjoy satisfying and productive jobs and lives in Space, looked back at the history of looking forward, looked at the realities of where we were in 1981 and envisioned, logically, how regular people would be living in the year 2081. Some of the gadgets and infrastructure that he thought would take a hundred years are with us already, others are in the news today as being right around the corner and some are just waiting for smart people to understand the need for them and make them real parts of our daily lives.

“This book is in four parts. In the first, ‘The Art of Prophecy,’ we’ll explore in a pragmatic way the lessons that can be learned from the colorful history of earlier attempts at predicting the future. In the second, ‘The Drivers of Change,’ I’ll describe five developments that I believe will determine, alone and in combination, the course of the next hundred years. In the third part, ‘Life in 2081,’ I invite you to join me in a tour through the world in which our great-grandchildren will just be at their prime. In the fourth part, ‘Wild Cards,’ we’ll explore the most exciting developments of a century from now that are just at the limits of possibility – and some that are, perhaps, well beyond those limits.”

“It’s an exciting future that I’m predicting, even more different from the late twentieth-century than our own time is from 1881. Some people may be frightened rather than attracted by the prospect of so much change still to come. But we need not be afraid if we approach the future armed with understanding.”

“We have a responsibility beyond mere curiosity to learn as much about the future as we can, because we must choose those actions that will insure not only the survival of humanity, but an improvement in its condition.”