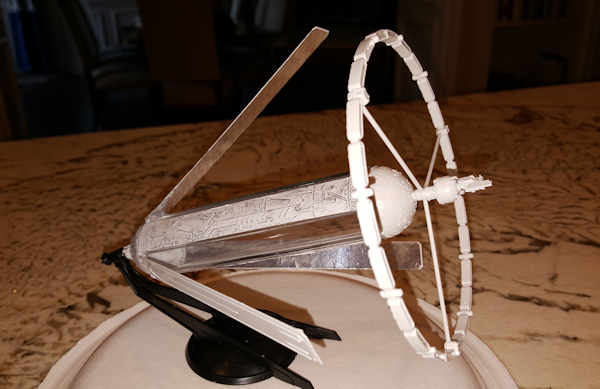 With summer coming to an end and vacations over it’s time to find things close to home to keep the kids (or grandkids) occupied. How about an O’Neill Colony that’s easy to put together and makes The Vision a physical reality that you can see from all angles … on a desktop scale?

Long ago SSI paid thousands of dollars and waited months for a rather large Bernal Sphere model to take to conferences, alas that model was lost to the past (and as I hear tell, it was a pain to move from place to place) but right now for just about the cost of a video game your family can have an O’Neill Cylinder that you can put on any shelf  or take with you to meetings.

This model from the Wave company in Japan was created for fans of the Anime series Mobile Suit Gundam 00 (which has no relation to the annoying song, “MSG” is a multi-season series set in a future where SSI Colonies and Solar Power Satellites – and giant mechs – are part of normal life).

This is a near-perfect Island for engineers and budding engineers to display.  Plus, it’s really easy to put together. Technically, it just snaps together so careful fingers and a fingernail file to gently smooth the little nubs down is all you need.

Here’re a few images to hopefully get you interested:

2) The cool special booklet showing details of the “real thing” It’s in Japanese, but pretty obvious. 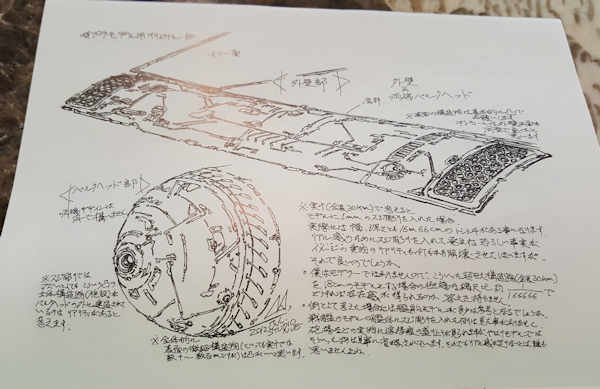 3) After carefuly removing the parts from the marked pieces frames (they are all numbered to make it easy), you just apply the stickers that show the interior valleys and snap them to the end caps.

3 take 2) Oops, the instructions say to snap the three windows in first, that helps the valley parts sit better between the windows.

5) Slide the end cap covers over the end caps and the mirrors lock into place, meaning no glue is required and all of a sudden the model is very secure.

Now  just slide in the metal bar, slip that into the base, then pop on the agriculture ring and the service module and… voila!

Now, when I was trying to get the ag-ring pieces separated from the pieces frame I accidentally broke part of the ring (you might notice it sagging a bit at the top near the support strut).  So I drove over to the local Michael’s Crafts store to get a tube of model glue to fix it.

That trip not only fixed the break but also gave a fun story – and some interesting research:

While I was at the model section of the store there was a young man about 13 or 14 going through the paints and he asked me what I was working on. I told him it was a space colony which made him give me a quizzical look… so I said “the Space Colony from Mobile Suit Gundham” and he said “Ooh, nice!” I think that’s an interesting piece of information for folks who may be looking for a common-ground way of starting a discussion of The High Frontier concepts with younger generations.

But back to the model, I mentioned to the kid that I was lousy with a paint brush and asked if he had an easy tip to help me bring out the embossed detail on the model. His advice was to buy a small bottle of dark grey or black Testors model paint and a few cheap brushes, dip a brush into the paint then wipe it off on a paper towel so that almost no mark is left on the towel then brush the model with this “dry brush.”

I think I left too much of the paint on the brush … but still, it seemed to be a great tip!

The Wave Space Settlements O’Neill Colony model is available from sellers on eBay and Amazon. I’ve found the Amazon sellers tend to have a much better price, I paid all of 35 dollars including shipping from Japan and  I see them going for 60 on eBay.

Here’s a link to one of the Amazon listings (there are a few, actually) the seller I bought from was Toy Shop Japan Hobbyone, and I bought a second one for a gift from seller Makimono – both of them came in about a week, no problems at all.

Oh, my bad, you always use the Amazon Smile Program to make your purchases benefit The Space Studies Institute, so use this link for Amazon Smile:

By the way, if you came to this post after googling for Sports Illustrated Supermodels, I do apologize ;-).   And if you’re wondering why this post is titled “part 1″… come back in a day or so to get the instructions for a make-it-yourself working SSI Mass Driver. Yes, I’m serious. This is one that might spur your kids to consider a really cool Science Fair project this year!