There are many videos showing experiments of Wireless Power Beaming available on YouTube, most all mention either the 1964 Raytheon Microwave Helicopter experiments or the 1975 JPL Goldstone tests – and the official NASA Goldstone PR video alone has over 40 thousand YouTube views  (https://www.youtube.com/watch?v=7O44WM1Q9H8).

Today, we have something extra to add to the collection.

In the 1980’s the manager of the projects, who many rightly name as “The Man Behind Microwave Power Beaming”, SSI Senior Advisor Dr. Bill Brown of Raytheon Labs, made a special version of videos of those tests featuring his own voiceover for a more technically interested audience. The Space Studies Institute is very proud to bring this SSI Engineering classic back to the public. Please tell others about it.

Thanks go to new SSI Associate Mark Shaw for delivering the thought-lost VHS tape to us and to CyberLink for excellent video forensics software that helped clean it up so nicely. 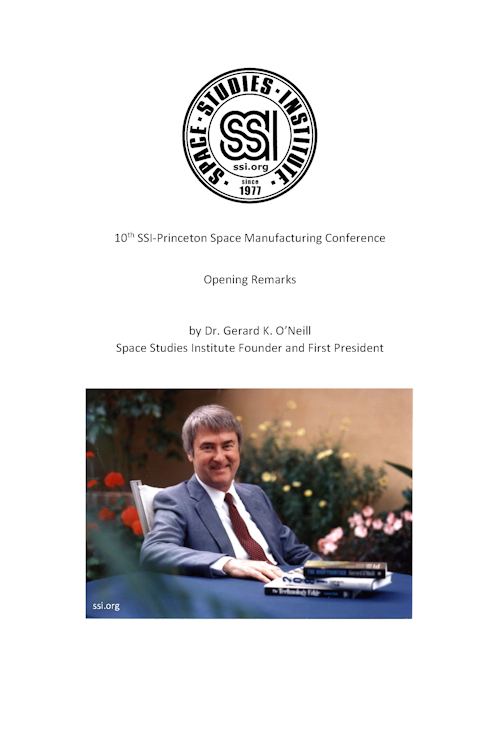 It was O’Neill’s last time together with the whole SSI membership, scientists and engineers and this short conference opener was, as they say, “A Doozy.”  There is nothing unclear or fluffy in the Professor’s words.

Acquiring copies of the complete collection of SSI Conference Proceedings is an expensive task for individuals, mostly these books are part of private research libraries, so there’s a chance that many even in the SSI family haven’t yet seen all of the details of the real work that can make The High Frontier Concept a reality.  We’re working on ways to make the volumes more accessible, but for right now we’d like to share with you this one small but very important chapter… The full text of those Gerard K. O’Neill Opening Remarks.

If you’ve been reading the quotes on the Facebook page and want more in context, or if you just stopped by here and are open for a very good read, it’s all yours on a free PDF from SSI.  I’ve read it myself and it clocks in at less than 6 minutes… but it packs quite a punch.

90 times Earth has moved around the sun since Gerard O’Neill was born, 40 times since he and Tasha started SSI to work on making a better future for Human Beings.  How many more times does the planet have to run in circles before we take it upon ourselves to pitch in and help its people truly get somewhere?

It’s high time to get people moving toward The High Frontier.

Heinlein correctly said at the end of Have Spacesuit Will Travel that there is no “Luck”:

“Why were you on that frequency? Because you were wearing a space suit. Why were you wearing it? Because you were determined to space. When a space ship called, you answered. If that is luck, then it is luck every time a batter hits a ball, Kip, ‘good luck’ follows careful preparation; ‘bad luck’ comes from sloppiness.”

Ever have one of those days when it seems every direction you look you’re being hit over the head by the same message in a different form?

For the past few days I’ve been working on the webification of the Q1 1996 SSI Update for the SSI Newsletter archives (thanks to SSI Senior Associate Robert Sugg for sending in his clean copy), this issue is a bit more time consuming to html-ize than most because of the number of Math and Greek symbols in the text of the main article (“Sling Launch Of Materials Into Space”).

Anyway, I had finished that article and was moving on to the “Power From Space: The Imperatives Of Commercialization” by Mary Woodell and just to have some media in the background I switched on the Roku to the Great Courses channel. I had recently purchased the course “The Science of Energy: Resources and Power Explained” by Professor Michael Wysession, Ph.D., but hadn’t had the time to watch it.

This course IS great, it does an excellent job at making the fundamentals of the economics, historical patterns and the science completely understandable to an educated, but not insider, audience.

The thing about it though is that it has so many Elephant-in-the-room moments. At so many times Wysession gets right up to the lip of mentioning Space Based Solar Power – I mean, right… to… the… lip – but then doesn’t take the step. And it doesn’t seem to be out of any Buck Rogers fear, because even in the very first lecture he takes a journey through Space to Mars and talks about the energy requirements for the trip and a Mars colony; Later he does a very nice reverse life story of energy to show the incredible inefficiencies of established energy products by starting from electric lamp in a house, back to the production plant, back through the mining/drilling, back through organisms that died to make petroleum and coal, back through the layers of atmosphere and back to the Sun.

Ugh! There was the perfect place to mention that avoiding all the hundreds of millions of years of middlemen is possible with SPS, but he doesn’t… take… the… step.

I was yelling at the TV.

I’m hoping that later in the course he’ll do the right thing at least to cover all of the bases, it is 24 30 minute lectures and I’ve only finished the first handful so there is time.  I like to go in order to appreciate the flow, and I do see that Lecture 23 is called “Probable and Possible Future Energy Sources” so maybe, maybe.

But here’s the point, in an early lecture just as he was saying:

“I think humans are a remarkable species and I don’t want us to take the chance that our human experience on this planet could come to an end because we took energy for granted and allowed our infrastructures to collapse. But public opinions matter and the views of people can greatly affect our energy decisions.”

… I was transcribing this paragraph from Mary Woodell:

We must recognize that, as with any technology, successful commercialization of WPT [Wireless Power Transmission] depends first on public acceptance, which then can be parlayed into market demand. Without acceptance, there will be no demand; and, in a free-market economy, without demand there can be no product. In short, broad public acceptance is a minimum requirement for successful commercial application.

The timing of this and other lineups was creepy ;-). But of course it wasn’t completely random coincidence, both the article and the lectures were generally about energy needs and the past 20 (30? 40?) years of limited changes in the power industry couldn’t make them differ all that much. The growing needs, declining resources and widening gaps between classes that The Club of Rome and Limits to Growth dropped like a bomb on the world – and that O’Neill and Glaser and Brown and their students offered options for – are hitting the mainstream hard now…  just as The High Frontier said that they would be doing.

So what can we do? Our friends at the NSS are righty very proud to let everyone know that SPS was – once again – brought to the leaders of the United States Government. SPS is called one of the top techs to work on – for ‘someone’ to work on. That’s good news – once again. But it’s not great if the population takes that news bite as meaning it’s all done and they can stop thinking about it – once again.

Along with the technical minutia that many of us can spout off in our sleep (and sometimes put people to sleep with at dinner parties), it’s important to have an understanding of how to put and keep the “Regular Sally and Common Joe” in the loop and actively interested so it doesn’t – yeah, once again – fall by the wayside.

I hope you’ll check out the article by Mary Woodel in the Q1 1996 SSI Update for some non-engineering information that may help us boost awareness of the actual, do-able benefits offered by Solar Power Satellites, and also ask you to consider checking out the Great Courses offering “The Science of Energy: Resources and Power Explained” to see how those currently outside of the SPS area are looking at the big picture, trying to learn the fundamentals and searching for solutions. A source of points from today and a source of considerations from 1996 can add together to make us better prepared for those impromptu conversations and on stage presentations about the SPS pillar of The High Frontier.

August 30th addendum: Remember, on the SSI YouTube Channel there is the Solar Power Satellite Roundtable video from the first International Space University sessions at MIT.  Peter Glaser, Bill Brown, Professor O’Neill and Makoto Nagatomo all together presenting the concepts and details of Space Based Solar Power technology.  Click here to watch it now.

On January 25th Cranfield University in Cranfield, Branford, England presented the inaugural ‘Manufacturing 2075 Think Tank’.  It was a wonderful meeting of presentations and workgroups and The Space Studies Institute was honored to be invited to be among the first participants.

Our session was promoted as a discussion of ‘Manufacturing on the Moon’ and we used that starting point to give an overview of the reasons for using the resources of the Moon but getting bigger payoffs by moving the actual manufacturing to a free-space location.

In other words, we presented The High Frontier Concept.

We hope that we were able to pique the interest of future manufacturing Leaders and perhaps even break through a few common misconceptions about the limitations of off-Earth activities.  After all, Space is big and the Moon and Mars and all of the other planetary surfaces added together don’t even come close to representing the true useable area that is available to business and humanity just above the Earth’s atmosphere.

We thank all of the conference participants for allowing us to wheel our virtual persona ‘head-on-a-stick’ into their discussion groups and we are indebted to Professor Rajkumar Roy [Director of Manufacturing, Manufacturing Department Director, The EPSRC Centre for Innovative Manufacturing in Through-life Engineering Services (EPSRC-TES Centre) and Director, Operations Excellence Institute (OPEX-Institute)], and Dr. Jen Fensome [Head of Research Excellence, Research and Innovation Office], and Samuel Court [Software Development Engineer & Lab Manager at Cranfield University] for making SSI feel so welcome and for putting on such an exciting event.

SSI members in the UK may wish to take a look at upcoming Cranfield University events including the Manufacturing on The Moon Apprenticeship Competition coming up in May. For information on that event please click here.

And if you have 12 minutes, we invite you to view the SSI presentation that gave a very quick overview of the SSI High Frontier Concept to the participants in the first Cranfield Think Tank, we recorded it to a video and it is available now via the SSI YouTube Channel.