The news today is of a rebirth of the Limits To Growth issue that this planet faces.

People are talking about this “down to earth” set of topics again which is very, very good.

Him: So we should force population control?

Her: No. No… no no no no no. That is not the idea and it won’t work anyway, check China and India for historicals. There is NOT a population problem, there is a Resource and Area limitation problem. A planet is what it is, it has what it has and no more. There can never be too many people, but there can be too many people in a place not able to support their numbers. No planet can get around this.

Him: So we need another planet?

Her: We need more area with resources, so once we get past the pre-Copernican warm and comfy feeling that “The Whole Wide World” is all that we have to work with then we have to start doing real comparative planetology. And once all of the actually available areas – not fluffy exoplanets until we have the tech to get there – are judged with their positives and negatives and potentials in the near to far terms, we have to ask the question “Is a planetary surface, any planetary surface, really the best place for an expanding technological civilization.”

Him: But you can’t lift enough people fast enough to overcome the rate of births, we’re past the tipping point of birth rates. You can’t free up the Earth by moving just a few thousand off of it or even a few million. It’s the two trains leave the station math problem.

Her: That is likely true. So the real question is how do you get humans to not have such a growth rate in areas where a population level is limited by available resources.

Him: And we’re back to forced sterilization.

Her: No. We at a point where we can look where resource availability is low and the population growth rates are highest and find out why. A small fix may make a big difference. One topic that developed countries overlook is that underdeveloped countries still have the need to have lots of kids because those kids are traditionally the machines they use to gather enough food to barely get by. If a family had a tractor instead of an ox (which is still a real technology out there past our borders) then the work takes less children. Such a family would then have the option to send one or two kids to school instead of putting them in a field. Higher education leads to awareness of options beyond making more babies at younger ages.

Him: And tractors blow out pollution…

Her: In the US we are in an electric vehicle revolution, electric tractors are a real possibility.

Him: You like looking at the core and you miss the big one there. Electric cars in the US are mostly really Coal powered. Mostly they do little to help the pollution problem.

Her: Ahhh. And you might be missing a core in this very conversation… what if instead of using Coal, which is just a battery for a very small relative amount of energy that fought its way through the atmosphere millions of years ago, what if instead we could go to the pure source directly and eliminate the middleman and the millennia or “processing time” it takes to make that battery? What if we could get the free high output energy directly?

Him: Solar power, yes it is coming but still the efficiency is not there and as soon as nighttime starts or a cloud rolls overhead the power is gone. That means we need better batteries and HUGE ones for more than just a single house to have its lights on for a few hours each night. And remember that batteries are toxic so you haven’t gotten around the pollution issue, you’ve just moved sideways.

Her: That is all true.. unless you can get out of the nighttime and cloud limitations. And you can.

Him: You can’t stop night from coming.

Her: No, but just 8 minutes away from any place on Earth there is no more nighttime and no more clouds. Remember your Copernicus… Earth is not the center of the universe, the “whole wide world” is not the whole of what we truly have been given to work with. 8 Minutes from where you are the power is streaming past us non stop, no indigenous native culture to kill to get it, no wars to be fought to get at a small patch of land hiding it from miners. Space, even just our small local neighborhood of it is very, very big. Imagine the Sun, the energy is pouring out of it in every direction billions of square miles are seething with the pure good stuff, more than we could ever dream of over-using and with billions of years more coming non-stop and just being thrown away.

Him: Solar Power Satellites, Peter Glaser, Bill Brown, Gerry O’Neill, yeah, yeah. Big in the 80’s but if it was so perfect then we’d be doing it. The systems are too big to launch.

Her: Actually, the high tech parts are a workable mass to launch… it’s mostly the dumb support structures that make up over 90% of the actual mass of any factory construction. The dumb girders are too much for even our very best chemical rocket tech to launch but remember, Earth is not the only place to get dumb mass.

Him: We don’t have a big scifi Lunar space fleet.

Her: We Humans never, ever have what we don’t think we need. Talking this out shows that there truly is a real need. But more importantly to the specifics of this line of talking… once you look beyond the common and incorrect idea that everything in space has to be launched from Earth, and always with rockets, options start appearing. Ever heard of a Mass Driver?

SSI, Engineering for the Human Breakout Into Space… for ALL of Humanity. Join us as a Senior Associate and be part of the solution.  Click Here Now.

The Space Studies Institute giveaway of the Kindle editions of Gerard K. O’Neill’s 2081 and The High Frontier just ended a few minutes ago.

SSI Associates: Thank you so very much for spreading the word on this exciting promotion and getting two amazing books into the hands of a new generation of forward looking readers!

New friends: Go read! And as you are reading don’t just take it all at face value, think about it, look for connections and check current resources to see for yourself if the fundamental concepts and opportunities that O’Neill described have real possibilities for creating a better Human future. We think you’ll be pleasantly surprised and we look forward to seeing you join us at SSI.

Missed out on this free giveaway? The standard price of just $6.99 USD for the SSI Kindle editions is a great bargain for the information in these classic books so don’t look backwards, just head over to the Amazon Kindle pages for 2081 and The High Frontier and make that investment in your future.

Thank you from The Space Studies Institute, founded in 1977 by Gerard K. O’Neill for the Human Breakout Into Space.

We broke the news yesterday for SSI Associates to get their jump start and now it’s open for everyone:

For a limited time The Space Studies Institute is giving away the Kindle editions of Gerard K. O’Neill’s 2081 and The High Frontier for free!

2081, an amazing look at the future rising around us, and The High Frontier, the cornerstone book of the NewSpace generation, are both regularly priced at $6.99 USD but right now they are  online around the planet for free download from the Amazon.com websites and Kindle stores.

For details on 2081, just jump down to the previous SSI Blog post and as for The High Frontier, well, if you haven’t heard of it then it’s time you laid the right foundation in your Space education.

Space is the place where there are no limits  and where benefits to ALL of Humanity – everywhere – are free for the using with no need to harm anyone.

Sound far fetched? Sound naively Utopian and absolutely unachievable? Until a person actually reads The High Frontier for themselves, they should be careful about jumping to conclusions.

And then he systematically looks at what it means for a civilization to expand, what such a civilization truly needs for real positive growth, and finds that all of those requirements and more are in no way out of reach.

Professor O’Neill makes this book of real science and real technology readable by most everyone by using fascinating “Letters From Space” followed by clear explanations of the hows and whys.  O’Neill was a world-renowned scientist but he had the gift to make even the most technical information completely understandable.

If you’ve never personally read 2081 and The High Frontier, you are in for a truly amazing experience. If you haven’t read them in a while then now is a great time to refresh your memories!

To get your free copies, log into your Amazon.com account using your web browser or start the Kindle Store in your Kindle app or device to search for the “O’Neill Kindle 2081” and “O’Neill Kindle The High Frontier”.

Click on the Buy Now button.  Note that the Buy Now is not the one for the kindleunlimited subscription program. 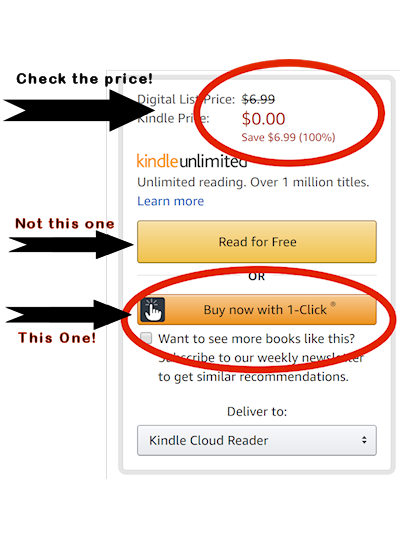 “Sync” your Kindle device or app to see your new books in your bookshelf and click them to begin the downloads.

They’re all yours so Start Reading!

Read on your Android, iOS or Windows Phone while in line at the grocery then pick up where you left off while relaxing at home with your tablet then start right up again on your Kindle Fire, Voyager or DX and even steal a few minutes at work using the Kindle program on your full Mac or Windows PC.

The Space Studies Institute is giving away the Kindle editions of Gerard K. O’Neill’s 2081 and The High Frontier.

The clock is ticking on this limited time offer, get yours now and tell your friends!

important notes: Amazon Kindle promotions may not be available in all countries or areas, as of this writing it appears that all of the Amazon links above are showing the price as zero but the exact countries and timings are up to Amazon. Due to the way eCommerce systems work, Start and End times of free book promotions can not be exactly specified.  SSI Kindle editions are available in many countries but at this time the texts are only available in English.

For many years, OMNI Magazine was the jewel of popular Science and Science/Speculative Fiction periodicals and the Space Studies Institute had quite a relationship with the magazine – SSI CoFounder Gerard K. O’Neill did interviews and wrote articles and OMNI’s legendary Founder and President Kathy Keeton sat on the SSI Board of Advisors.

In the October 1984 “Life in the 21st Century” issue, O’Neill contributed the piece “The High Life In Space.” You can now read that again as it appeared in OMNI thanks to a new company, OMNI Media, making all of the old issues available in high quality color Kindle format on the Amazon.com site for a small price.

That’s the slick paper version… with the story’s future date of “October 4, 2018”

Right here, you can now read the original draft version “Life on The High Frontier”, straight from Gerry’s dot-matrix printer.

Why bring this out of the SSI vault today? 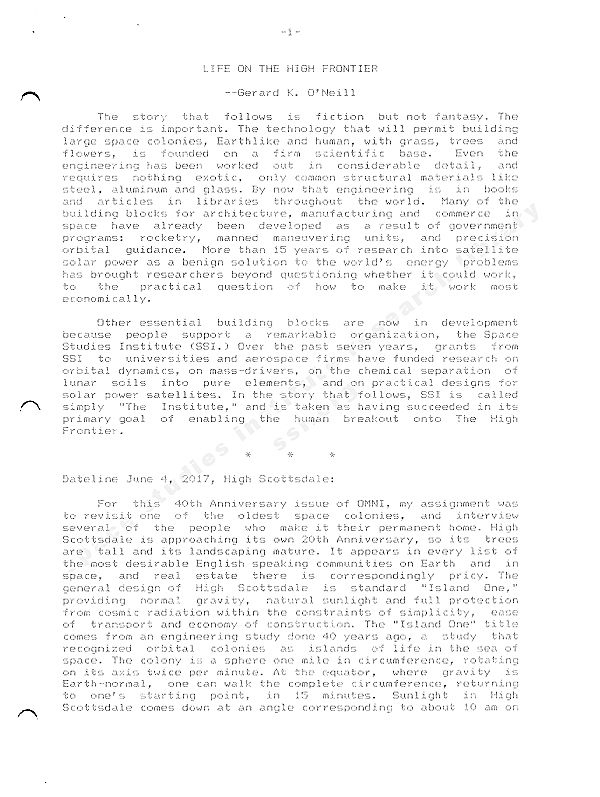